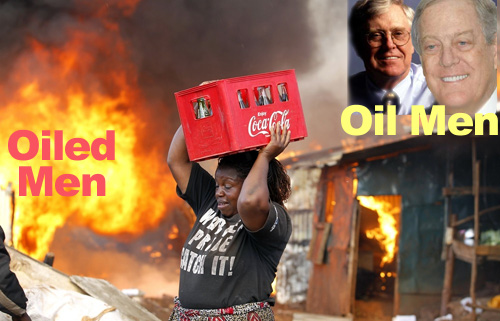 I went to bed last night with a sore throat caused by a horrible oil spill disaster near the Nairobi airport and woke to learn that hundreds had died, thousands more had burned and the still unfolding story needs to be told again and again to the west. Read on, if you can.

My luxury Norfolk Hotel is about nine kilometers as the crow flies from the disaster site. In that mere 5½ miles live up to 1 million people, and there are no high-rises. Nearly 90% of them in the slum only 1 mile from the airport where the fire occurred.

They live in the most miserable conditions imaginable. When I first wrote my novel, Chasm Gorge, I described a Nairobi slum but tried to focus on its better aspects. The way slum dwellers help each other, creative methods by which they eke out a living, and most of all their unbelievable tolerance of their suffering.

That was ten years ago. Today the slums are three or four times larger. The popular film Constant Gardener brought world attention to the slum, Kibera, that was the model for my description. Kibera is one of 8 slums around Nairobi, and if one dare compare one slum with another, probably the best one to live in.

How many people live there? I can’t find out. The Kenyan government can’t find out. At least 2 million, but perhaps 3 maybe even 4 million. The last good census of slum dwellers was more than ten years ago. It was so flawed, I think people just gave up. Ten years ago I would never have imagined the situation would have reached the tragedy of today.

YET…
…the tolerance for suffering continues.

We know in America what happened in the 1960s was at least partially the result of popular uprisings against the abhorrent conditions found in Cabrina Green in Chicago or Watts in Los Angeles. And those conditions compared to what is found in Nairobi today are simply incomparable.

Here’s what happened yesterday. An oil pipeline bringing super gas refined in the coastal city of Mombasa and flowing at 590,000 liters/hour ruptured around 9 a.m. The pipeline runs under a slum. This was the third major Kenyan oil pipeline spill since 2009. And frankly, compared to the other two, it was small. (Probably less than a half million liters were lost before the pipeline was shut down.)

But it has been raining unusually in this dry season in Nairobi, and the oil made its way to a river that now flows through the slums. When residents realized from the smell what it was, they frantically began trying to collect it from the top of the water.

Someone’s cigarette dropped on the river. The fire exploded back up the line towards the pipeline rupture, and in its way was the slum. In seconds, tin shacks were ashes. Giant plumes of toxic smoke filled the air. Some residents on fire jumped into the river, but it was burning. Old manholes on sewers that have been stuffed and inoperable for decades blew into the air like rockets, giant fire spraying from them.

The official death toll as I write this is only 130. It will be much more. Hundreds are missing.

Now, can you imagine what would happen in the U.S. or Britain or Australia if something like this occurred? Well, guess who was the star guest interviewed on all the Kenyan TV channels this morning? The director of the pipeline company. But no one felt he should be blamed. Even the tweets and comments by people who live in the slums have exonerated him.

Everyone needs gas. They think he was doing the best job he could. As a result, he was totally honest about how bad the maintenance is on the pipeline, how much less the government has actually given him to operate it than he needs.

Did the Governor of California walk into Watts as it burned? Or the mayor of Chicago strol down burned out Wabash Avenue after the fires following the King assassination? Of course not.

But here the Prime Minister of the country and virtually every major political officer was in the slums this morning talking with residents, promising better conditions, pleading for the calm which already exists.

In Kenya and all the developing world on this planet, suffering is a way of life. When people ask me how possibly we can help, my answer has been steadfastly the same for decades and decades:

First, put your own house in order. If we cannot muster the human compassion to take care of our own uninsured, unemployed and immigrant populations, how can we possibly help others?

Second, forget about little charities, church bake-outs and tiny missions building little huts in the desert. This is all wasted energy. It makes us feel good, but it doesn’t do a damn thing for the developing country. This is because the solutions – whatever they are – must be massive.

I really believe, though, this is possible. I believe we can sweep away the TParty and similar thinking people into the dustbin of history. Human compassion is greater than human ignorance, as great as that ignorance currently seems to be.

So, Americans, start at home. Not with a greater tithe to your church, but with a renewed commitment to your society and government, and a willingness to sacrifice for the good of those less fortunate. And when elements in your society appear intransigent in face of this simple dictum, punish them. Force them to respond with higher taxes on them, stiffer regulations.

Make them share the happiness they achieve through other’s sorrow.

I know there is a knee jerk reaction to find a website to contribute to the “Nairobi fire.” But what about the Pakistani floods? What about your own floods?

The suffering in the world which is a result of poverty is structural. It can be changed. Start at home with the kingpins refusing to change, because we are at the top, we can make the most difference worldwide by simply doing our job at home.