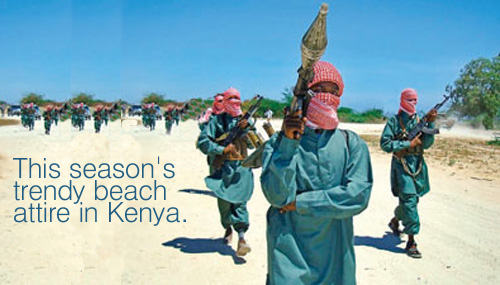 As we drove from the airport to the city last night, my newly arrived clients asked about the kidnaped British couple. The news isn’t good for Kenyan tourism, of course, but it isn’t surprising, either.

The couple, Judith and David Tebutt, were vacationing at a lovely beach resort on the mainland opposite Lamu Island off Kenya’s far northern coast. There are several truly beautiful paradise getaways in the area, but I’ve felt for a long time it wasn’t a good place to go.

About two years ago another British couple had been kidnaped while sailing their yacht in the Indian Ocean between the Seychelles and Somalia. Both situations were just too vulnerable to pirate attacks.

Initial news reports suggested the Tebutts’ kidnappers were al-Shabaab terrorists. I knew they weren’t, and later reports confirmed they are likely pirates.

The Tebutts and Paul and Rachel Chandler, the sailing couple, were in places they should not have been. So why were they there?

Both couples were doing little more than believing the advertisements that lured them to these tropical paradises without doing due diligence on the grandiose claims.

The Tebutts obviously didn’t read the New York Times and the many world newspapers that republished that story the day before they arrived of increased trouble in the area.

And if you think that’s unfair that a couple on holiday should be reading about where they’re planning to go the next day, certainly they had looked at maps before leaving England, hadn’t they? The Kiwayuu Resort where they were is less than 20 miles from the trouble in Somalia. Unlike Lamu, a heavily populated tropical island with lots of police, their beach was remote and unguarded.

And as for the Chandlers, the weak claim by Rachel that the Seychelles’ waters were “thought to be safe” is balderdash. Not long before their kidnaping a Greek freighter 1000 times bigger than their yacht was hijacked by pirates.

Don’t think me heartless. I’ve been in similar situations myself and involved in several more. We all would prefer a world where everything you read or hear is true. But my own past mistakes are not justification for others’, now.

I’ve learned, and you as travelers should all learn, that neither pretty picture advertisements or simple recommendations from friends who have been somewhere once stand as solid endorsements that it’s a good place to go. You’ve got to check it out further.