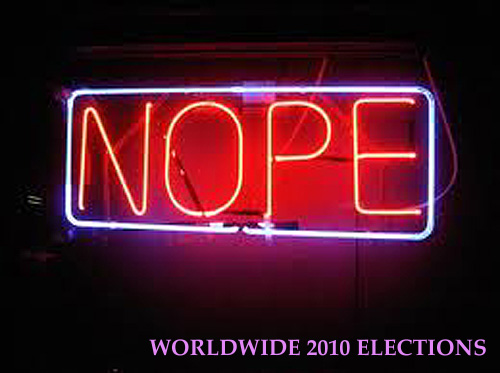 Worldwide people have used elections to express dissatisfaction. That’s the limit of a democratic vote. You can’t say what to do, just that what’s being done isn’t OK.

At home and in Tanzania, ruling coalitions suffered very seriously without losing complete control. The level of political slaughter is relatively the same, for example, in Tanzania as here, and that really suggests that worldwide democracy is manifesting in about the same way.

Here Democrats got slaughtered in sheer numbers of votes cast and office holders shown the door, yet managed to keep control of the Senate while pretty firmly rejecting any new “Tea Party” force in national life other than as a political spoiler.

In Tanzania the balance of power was much more off center to begin with, but the ruling Chama Cha Mapinduzi (CCM) Party lost more than 20 seats in a Parliament where they had held 185 out of 239 seats. Their presidential candidate, incumbent Jakaya Kikwete, was returned with probably around 65% of the vote, but this was compared to more than 80% the last time.

And Tanzania’s opposition consolidated, and fringe parties as with the “Tea Party” in the U.S. made loud noises but few gains.

The “economy-its-stupid” doesn’t work in the developing world, where growth is better than ever, unemployment is shrinking and business expanding. So why such similar outcomes?

Even when things, as in Tanzania, are doing pretty well. So why? 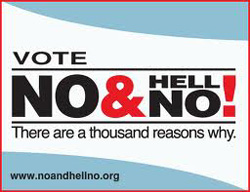 It’s a fascinating answer, if you’re willing to believe me. I think the wave of dissatisfaction emanates from The States and that it’s really more impatience than disapproval.

News, blogs, entertainment and money are dominated by the U.S., Europe and China in that order, worldwide. China remains essentially a closed society. Europe is the heady intellectual with a thousand different personalities.

Only the U.S. remains a cohesive culture – at least in the eyes of the rest of the world. And so in that old sparkling car adage, “So goes the U.S., so goes the world.”

Tanzanians used the same tool they share with Americans, a vote, to act the same way Americans acted. They voted, No.

We never learn what the No vote means in democracy. The vast number of voters don’t vote against their incumbent because he voted for Health Care and then scribble on the ballot, “Need torte reform, interstate markets and an increase in the eligibility age.” They simply choose the one alternative given them. And unfortunately, few voters care, really, what that opponent will do once elected.

And that’s what they did in Tanzania as in Wisconsin.

It’s a terrible curse of the theory of democracy. You’d like to think we had multiple choices, multiple ways to express ourselves. But we don’t. And when the world’s most powerful culture wants to say “No”, so does the rest of the whole wide world.