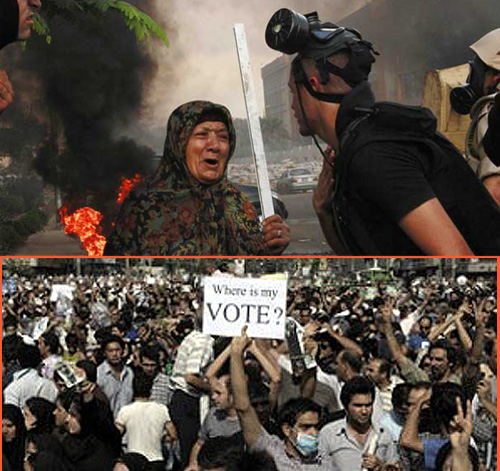 The western world is in denial about Egypt as pundits and politicians alike desperately try to boost the failing image of democracy. It’s time to throw in the towel.

President Obama’s remarks this morning fall short of what I, the New York Times and Washington Post among hordes of others believe should be done: cut off aid. We all hope Obama’s dances of concession and moderation work better with Egypt than with Congress.

Remarkably, the facts are pretty well understood by everyone. Politico has summarized them best.

(1) The Arab Awakening was mostly brave, progressive movements started by intellectuals who believed authoritarian regimes (which had essentially nurtured their own development) were no longer needed and were, in fact, inhibiting better economic growth and social progress.

(2) The success of the Egyptian awakening enfranchised millions previously suppressed.

(3) A truly democratic election in Egypt brought extremists to power. The Egyptian election removed power from secularists and gave it to non-secularists.

(4) Almost a year into the new regime and the original revolutionaries began to experience similar repression to what those now in power had experienced for decades previously.

(5) The original revolutionaries demonstrated through really remarkably large peaceful protests that they wanted to replace the current regime.

(6) The Egyptian Army, equally educated, privileged and intellectualized as the original revolutionaries, agreed and staged a coup.

Democracy by the ballot died in Egypt.

Today is cleanup of hundreds killed and thousands more hurt. Tomorrow, prayer day, could be worse.

What if the Egyptian army supported the salafists? Like the Iranian army supports the ayatollahs? Would this globalize the situation sufficiently, so that someone with more guns, like NATO, could prevail?

What is an acceptable justification for undoing the workings of democracy? Promotion of “Human Rights”?

Yes, but who defines these rights? Who determines the limits of eminent domain, conscription, voter registration, and all sorts of other civic responsibilities?

What we are being forced to understand is that there is no such practical thing as democracy. Africa – Egypt in particular – has revealed that to the world.

Democracy is a goal that will never be attained. Eyad Abu Shakra explains that the times “requires us to be both realistic and honest.”

“Honest” that we don’t care the regime came to power legitmately; it must be replaced. “Realistic” that democracy caused this mess in the first place.

His understandings of so-called democracy will shake western politicians to their core, and so they should: There’s no quick trick to best government and democracy is no better a way than communism or authoritarianism. There’s much fallacious in the concept of democracy:

“History is rife with examples of authoritarian regimes that … came to government through the ballot box. In the U.S., four presidents have been able to enter the White House despite securing less overall votes than their electoral opponents.”

No society – not even the U.S. – operates anything near real democracy. While illiteracy undermines most democratic initiatives in Africa, money does in the U.S.

Shakra believes the Egyptian example is the best example in history to prove how bad democracy can be. In the first round of elections Morsi received less than a quarter of the votes. But by the rules of democracy he was cast in a second round contest with an opponent equally unpopular.

It was an election for most Egyptians of “the lesser of two evils.”

How often have we heard that? Does that kind of situation lead to best government? Of course not. Does it at least give us adequate government? Apparently not in Egypt.

Or throughout the entire Levant, according to Shakra, which “is inclined to intolerance, extremism, exclusion, and trading accusations of apostasy.”

Shakra fails, though, when he cites “true democracy” (which I don’t believe possible), “as incompatible with extremism” which is perhaps true enough.

It’s all summed up, Shakra explains, with Winston Churchill’s witticism:

“The best argument against democracy is a five-minute conversation with the average voter.”

Now, what? Might democracy itself be the “lesser of other evil” forms of government? Not in Egypt. Or in Russia. Or in a superpower that devastated the Middle East with a ten-year war, powered by the democratic convictions of its population and leaders that there were WMD.

There must be something better.