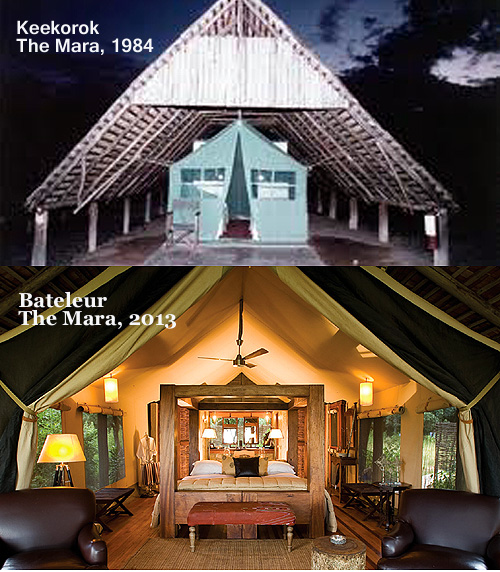 Safari travelers thirty years ago paid only a little bit less for air fare but only about a fifth as much for their safari!

Recently my good friend, the Cleveland Zoo Director Emeritus, Steve Taylor, sent me a copy of the brochure for the safari that my company, EWT, operated for him when he was director of the Sacramento Zoo thirty years ago!

The 15-day Kenyan safari roundtrip Sacramento in July, 1984, cost $2935 per person and from what I can tell there was no supplement for traveling as a single. Back then people were afraid to travel as singles! I remember that one of the services our zoos and other not-for-profit associations provided was teaming up single bookings.

The itinerary was similiar to what a 15-day land program would do, today, although today the average time travelers take on safaris is only 11 days.

And back then there was no flying … it was all driving. And the driving wasn’t so bad, really, because the roads were OK and the traffic was minimal.

Today, travel for example between the Mara and Nairobi is more often by air than road.

To book the safari you had to make a deposit of $300, about the same percentage as you would today. But the deposit was refundable! For this program, which began on July 10, 1984, you could cancel up to May 12 for only a $35 penalty!

Holy Smokes! That would kill us tour companies, today! For one thing back then we held the deposit in the U.S. We rarely paid our African vendors until shortly before arrival, and sometimes not even then. As our reputations grew more reliable, we would be invoiced after the trip for the costs.

So we could extend that refundability advantage to our customers. Today most safari vendors in Africa require up-front payments which are nonrefundable.

1984 was a critical year, as I remember. It was the year that airline deregulation started to be implemented, so when airlines began to become more competitive. But it hadn’t translated into prices, yet. That wouldn’t happen until around 1986 when prices began to drop steeply.

And as those of you who regularly read me, I don’t think that was a good thing. As Steve and many other veteran travelers will tell you, airline travel back then was a dream. Bigger seats, easy check-in, all the luggage you could muster, fantastic attendants, excellent food and wine … not today.

So airline services are reduced so much, today, that they’re almost intolerable … but the price is the same. Safari services, on the other hand, have grown better and better … and it costs you five times as much.

There are, in fact, still some downmarket tented camps that look like the best we had in 1984, but their prices are about twice as much as what we paid for the only (and then, best) accommodation in 1984. And the best accommodation is astronomically higher today than then.

Because .. not only does everyone have flush toilets, today, but in the better camps both an indoor and outdoor shower. Hot water is available 24 hours, not just a few hours during the day. Tents are giant size compared to before, with beautiful furniture and rugs and wonderful, massive beds. There’s electricity! Not just kerosene lanterns. And the food today at the better camps rivals any good restaurant in a big American city. Quite different from our beans and rice and occasional stick of boiled chicken of days gone bye.

And the animals? Well, actually, there are more of them today than in 1984 with the notable exceptions of the lion and a group of smaller animals like duikers that have been sacrificed to the felling of so many forests. But all the animals that thrive on the plains are in greater numbers today, than in 1984.

Which I’ve often written about poses one of the greatest challenges to East African development. If you’re a student or venture capitalist in Nairobi, you don’t want a lion disrupting your morning commute or an elephant traipsing through your garden, and if you’re a farmer – believe me – you’re not going to like tourism. 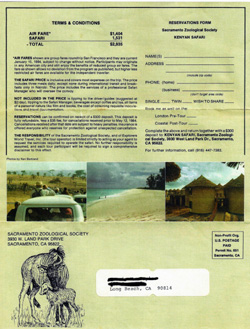 But there were definitely things back thirty years that made a safari more wonderful than today: the many fewer vehicles, to begin with. Friendly and safe “little” Nairobi and Mombasa. “Safe” and “secure” weren’t even terms we applied to anything other than wild animals.

And call it nostalgia if you will, but the “wildness” of those endless plains thirty years ago was a thrill hard to recreate, today. At least in the same way. No cell phones. No internet. No Flying Doctors. No way of “checking in” back home meant that you were really stepping onto a landscape where no one but your fellow travelers would know where you were.

And people were willing and anxious to do that back then. Today the safari traveler is infinitely more cautious and I think less inspired by the potential differentness of Africa to alternate vacation spots. It’s one of the reasons prices have gone through the roof even while the average income of a middle class traveler hasn’t.

The ecologically correct shampoo, feather bed and pillows, well delivered ginger snaps with early morning tea and of course a charging station for your smartphone are now essentials.