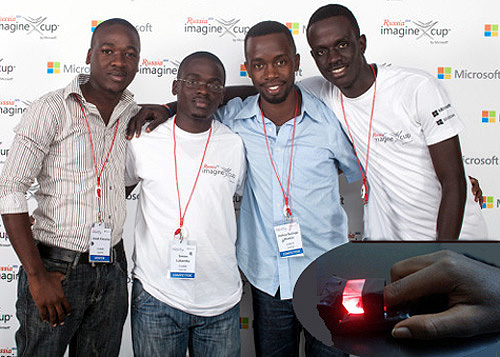 Any notion that’s it more than ironic is lost immediately when you realize that pregnant mothers in Africa harbor a greater fear of having malaria than any other group.

This is not only because malaria can quickly end a pregnancy but because the treatment can harm the fetus and in cases where the mother is less than perfectly healthy, cause miscarriage.

The four Makere university students engineered the device which is plugged into a smartphone, and created the app software that analyzes it.

The best test for malaria is a blood test. But the test will often come back negative when in fact the patient has malaria. What? This is because the best symptom of malaria is altered red blood cells, which explode in the body during a malaria attack but then are methodically excreted. A malaria attack rarely lasts longer than an hour, but the interval before the next attack can be as long as twelve hours.

So by the time the patient gets to the clinic and waits for her test, her symptoms may have subsided. And since reading the microscopic results of a swab is a human endeavor, mistakes happen and more often when the sensitivity of a pregnant mother is considered.

My wife suffered the same incorrect diagnosis here in the U.S. after returning from a safari and contracting malaria.

We called our doctor while she was having the attack; we knew it was malaria. But by the time she felt good enough to get in the car (after the attack subsides), travel to the hospital, wait for the test, 3-4 hours had transpired and the diagnosis she received was negative.

(Aggressive protestations sufficed for us to get the right therapy, and she was cured, and a subsequent visit with a test closer to a subsequent attack before the medication began to take hold proved we were correct: she had malaria.)

The four Uganda computer science students created a simple red-light device which they call a “matiscope.” Similar, in fact, to the types of devices that read fingerprints, the red light sensor detects red blood cells without any skin piercing.

Blood cells ooze to the surface of the skin normally all the time, but are so few they aren’t noticeable. And the skin itself is porous. The light penetrates several micro layers reaching even more red blood cells.

The sensor detects a blood cell altered by a malaria attack instantly.

The four students were guests of Microsoft for the company’s annual “Imagine Cup” competition for students, this year held in St. Petersburg. While there they won the inaugural Women’s Empowerment Award organized by an UN agency.

Brian Gitta, Joshua Businge, Simon Lubambo and Josiah Kavuma call themselves “Team Code 8″ after laboring through eight different computer code designs before hitting on the one that worked.

Team leader, Gitta, told an audience he was motivated to invent the device because of his “fear of needles” and being “pricked to death” as a child who constantly contracted malaria.

But, in fact, simply reducing the time between the attack and detection is the genius of the invention. And Team Code 8’s matiscope and the software they developed to detect the altered red blood cells isn’t sophisticated enough yet to determine the specific type of malaria (there are four types) or exactly how bad the infection is, often necessary for determining proper treatment.

So it’s a first but very important step, and for millions of people who might be infected, it might be all that’s needed. Normally otherwise healthy adults who contract malaria can be prescribed rather standard levels of medication to wipe it out, without knowing specifically the malaria type or level of infection.

What it means for pregnant mothers, though, is that the doctors have to hospitalize the mother and make sure that the blood test is taken immediately as the next attack begins.

The practicality of the device, though, allows for self diagnoses very much as similar devices are being manufactured today for pregnancy and HIV AIDS.

The app for the smartphone, of course, is cheap. But right now the plug-in device is fairly cost prohibitive for most individual rural Africans, but could prove cost beneficial for remote health clinics, companies and institutions which provide on-site medical care, and of course, hospitals.

But the Team is contacting entrepreneurs around the world who with mass production could greatly reduce the cost.

Leave it to the kids, eh?