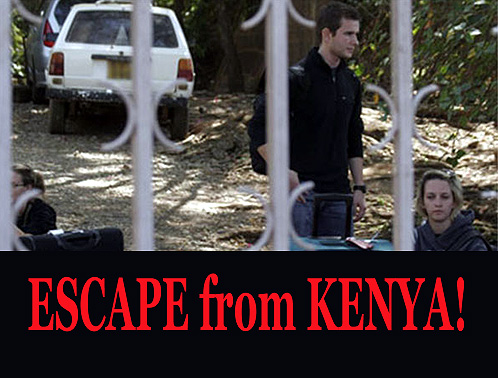 Confusion, (global) stupidity and pure intrigue surround three U.S. medical students who just escaped from a hotel in western Kenya that had imprisoned them. Where are they, now?

Logan Key, Brooke Weiser and Ilya Frid, students on a work-study project with the questionably reliable Medics to Africa program, had been locked inside the little Gilly Hotel in Migori, Kenya.

Kenya media reported that the kids refused to pay a hotel bill when presented to them at checkout. They told the hotel manager that they had paid Medics to Africa before coming to Kenya for all the services they had used, including the hotel accommodations.

So the hotel manager … locked them up!

The weekend brouhaha made national Kenyan news and prompted local police in western Kenya to arrest the Kenyan agent who had booked the kids’ program.

But – absolutely remarkably – the police refused to free the kids from the hotel!

It’s unbelievable. Client/hotel disputes are not uncommon throughout the world, and particularly when a middleman or agent is involved. I can’t remember, though, a single case where the dispute involved locking up the patrons.

Normally, documentation presented by the client showing that payment has been made is sufficient for the hotel to send them off with a smile. The hotel may know from the getgo that they haven’t been paid, but the risk of bad PR from abroad is too compelling for them to start a fight.

The hotel is essentially accepting blame for having itself made a bad decision: extending credit to the agent that was supposed to pay.

Dozens of times I’ve been hired as a consultant by African tour companies to collect these bad debts from intermediaries. I’d say my success rate has been less than 20%, and then only after some serious negotiations that recovers far less than half that’s due.

And I’ve always approached these jobs with full disclosure of such, berating the African companies from the beginning for extending credit to questionable agents. And then continuing to extend credit when the account falls into arrears.

That’s the main problem. I remember, in fact, tracking down an Ohio zoo group at Ngorongoro Crater and telling them that the vehicles they were using wouldn’t continue on if my client, an African tour company, weren’t immediately paid.

Of course, I was bluffing somewhat, but I was furious. And we gathered enough credit cards that I managed to recover about 30% of what was due.

I was furious at everyone, as I am with this story. Of course I was furious with the zoo officials who had not completed due diligence with their American operator (the real culprit who had collected the individuals’ money and bagged it away), but I was equally furious with my African client for having driven them out of Arusha to Ngorongoro without having been paid!

I can’t stand incompetence, but I explode at fraud. And I go bonkers at abject stupidity.

In this case it’s so clear what happened: Medics to Africa, despite one of the kids claiming to the Kenyan media that it was recommended by the American Embassy, which is not true, is not a reputable company.

The owner is currently in jail for having absconded with a far greater amount of money than these three kids’ hotel bill. When you drill down beneath the so-called testimonials shown on its brilliant website, and make all but a few calls to Kenya, you’ll discover that the man is a crook and known to be throughout the community of Migori.

The naivete of believing a website is absolutely incredible.

But wait! In this case, even that would be going too far. The hotel owner claims that Medics to Africa had a huge unpaid bill. So why did he even check the kids in without getting at least their payment? He could have refused accommodation when they tried to check-in… that would have been legal.

But wait, wait! Why did the police not free the kids?

My goodness, this story is incomplete, and I’ll try to run it down for you as the ending unfolds. Meanwhile, help these naive kids learn their lesson.

Be careful when you travel. Just like your third grader, crooks know how to make pretty websites, too.