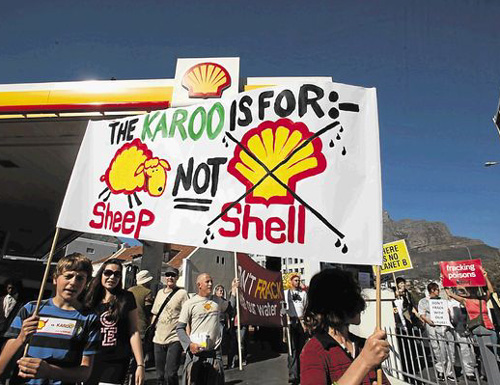 At a private party last night in my remote woody knoll in the Upper Midwest, I listened with fascination to an entrepreneurial engineer describe several devices that could create cheaper, quicker fertilizer for farmers, then totally separately, medical devices of the R2D2 kind.

Recently, the South African government strongly affirmed a controversial decision made last year that seriously impacts the potential for my friend’s successes.

Fracking must go on, the South African government declared, despite increasing opposition by environmental groups.

My friend’s inventions like thousands of others worldwide attracts investors motivated almost entirely by their presumptions of future energy costs.

There are scores of new inventions presuming much higher energy costs, like my friend’s microwave device to produce fertilizer.

But as with many biofuel processes, it’s only efficient if the costs of production are lower than traditional processes associated with increasing energy costs.

And last night I listened to this passionate inventor, who also considers himself an environmentalist, concede that the chance for his inventions to become reality could be linked to fracking successes.

The glut of natural gas fracking is producing has so lowered the cost of traditional fertilizer manufacturing that his models are now stressed. The chances of attracting investment – at least in the immediate term – are now diminished because of fracking.

Last year the South African government lifted a year-long moratorium on fracking, and the issue as in the U.S. is now headed to the courts.

Few on either side dispute the facts. Fracking is a particularly intrusive environmental mining technique that often pollutes ground water, the most immediate hazard that can shake public support.

As in the U.S. and elsewhere in the western world, governments’ replies attempt to assure the public that the situation will be diligently monitored, and fracking will be suspended if pollution is detected.

Governments are widely supported by government-subsidized science, including the U.S.’s widely cited EPA study that essentially gave a green light to fracking.

Of the entire developed world, only France has banned fracking. But that is likely because 80% of France’s energy comes from nuclear power plants.

Everything, today, is inextricably linked. My friend’s microwave invention for fertilizer, to neighbor’s solar panels, to Chinese employment of solar factories, to the safety of the water I drink.

Moreover, I think if the beneficiaries of our energy debates were truly public, and not measured as the profits of BP-Shell, the debates would be quicker and more accurate. I really see that as a major part of our energy dither, the inability to extract private enterprise from public good.

I’m no scientist, but ever since I met and lived with my wife in Paris, I’ve liked the French: Nuclear is the way to go.

That would empower not only South Africa, which already has nuclear energy, but my friends’ inventions as well.

But I haven’t yet passed this by my Japanese friends.