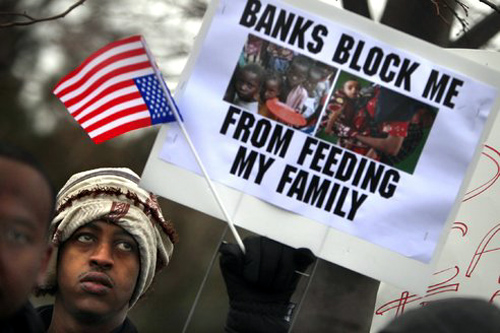 Another bank stops money transfers to Somalia as American business continues to foment terrorism in The Horn of Africa.

As of this morning Merchant’s Bank of California will no longer process customer wire transfers to Somali .

This leaves fewer than a dozen mostly small banks left in the U.S. that still process wire transfers to Somalia.

I don’t know if it’s uncontrollable fear, explosive ego or just abject stupidity, but it’s so clear that this action will increase terrorism and any threats to America as a result.

According to Oxfam, $215 million annually is sent by Somalis in the U.S. to relatives in Somalia, equaling or exceeding the total annual U.S. foreign aid to the country.

“… millions of Somalis … are dependent on this for their daily lives,” Degan Ali, the founder of a Somali support group in Kenya told Reuters today. “We’re talking about food, shelter, medical needs, education …” she explained.

I remember my own grandfather each Saturday wiring much more than my grandmother thought appropriate to his relatives in Croatia.

Large banks like Wells Fargo and Citibank stopped the service a decade ago, citing U.S. government regulation as the reason.

In a message last week to its intermediary agents, Merchants said it had received a “Consent Order” from the Department of the Treasury requiring new procedures to ensure that the wires did not end up in terrorist’s hands, and that the procedures were either impossible to comply with or to expensive to pursue.

So which is it? Is it the U.S. government incapable of managing a regulation that determines the numbers of zeros after “$5” used either to buy a month’s worth of cornmeal or a SAM missile, or is it the banks who just don’t want to be bothered by a few more checklists?

Last April two Congressman from Minneapolis where America’s largest Somali community resides, one Democrat (Keith Ellison) and one Republican (Erik Paulsen), introduced legislation in The House to clarify and simplify these regulations.

Guess what? Boehner and company dumped it as increasing government involvement in the banking industry.

In December Oxfam published a timeline of American regulatory agency involvement in this, documenting so clearly how confused and contradictory it is.

So whether it is messed up self-destructive ideology, or messed up poorly created regulation, or both, once again America is shooting itself in the foot.

There’s no question that too much money is getting into the hands of terrorists. But the significant conduits are Saudia Arabia and other of our allies! Not expatriates in Minneapolis or Los Angeles sending chip change to struggling relatives!

That presumption is the success of terrorism. There are so few American expatriate Arabs and Muslims who feel anything less than outrage against terrorism that I feel embarrassed every time I write this sentence! Americans don’t – or don’t want to – believe this.

So the system on all sides gets muddled, we make the situation worse and worse with cockamamy wars and stops on bank transfers.

We act against our own best self-interest. Isn’t that terrorism’s first objective?