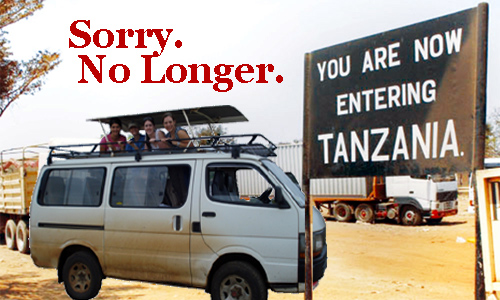 The row between Kenya and Tanzania over tourism last week is a strong indication that Kenyan security has improved and tourists are returning.

This little tiff has absolutely no effect on any but the most budget-minded tourists.

Nairobi has 20-25 times more international airline service than Tanzania’s northern airport, Kilimanjaro. Deal seekers who bought a $200 better air fare into Nairobi than Kilimanjaro until Friday were able to fly into Nairobi, then arrange Tanzanian transportation from the airport into Tanzania with a net savings of about $100.

That’s over. If you want a safari in Tanzania, you now either have to fly into Tanzania or take Kenyan transport from the Kenyan airport to a bus station or other transfer point.

Travel and tourism pundits, always the poorest of pundits, exclaim that Tanzania has done itself a great disservice by stonewalling the negotiations over the last three weeks aimed at finding a compromise.

Sort of, but not really given the current governments.

Obviously any easing of travel restrictions anywhere in the world can increase tourism. This year, for example, numerous countries in southern Africa began easing the restrictions for travel between them. With this incident, East Africa is moving the other way.

But Tanzania has squandered its treasures more than Kenya has. This isn’t to say that Kenya is lily white, hardly. But the level of corruption in Tanzanian tourism is considerably greater. The actual laws on the books in Tanzania regarding tourism, conservation and game parks, are the most complex, messed up pile of regulations this side of Riverview Park in Chicago’s mafia days.

This discourages foreign investment and that, above all, keeps business actors in the Tanzanian tourism sector small, ripe for the picking so to speak.

If the two countries opened their borders to one another, Kenya’s much better run tourism sector could virtually subsume Tanzania’s. It’s one example of the virtues of well run capitalism. I can’t think of many, but this is one.

I don’t doubt that Tanzanians will be sorry about last Friday’s outcome. Above all it shows that Kenya feels increasingly confident about its own tourism situation. Kenya had been acting unilaterally by not enforcing the 1985 agreement, seemingly only to Tanzania’s advantage.

But in the recent dire days of terrorism in Kenya, any business they could muster was helpful. Now as things are looking, Kenya realizes it’s time to muster its advantages, recognize that the better air service and lower air fares into Nairobi are reasons travelers might choose Kenya instead of Tanzania for their game viewing safari.

So why make it any easier for them to go to Tanzania, than Tanzania allows its incoming visitors to go to Kenya?

The fact is, of course, that were Tanzania to get its house in order it would have no problem competing squarely with Kenya. At that point it would greatly benefit Tanzania to ease as many restrictions between the two countries as possible.

That day will come right after we successfully sell ski vacations to Saudia Arabia.