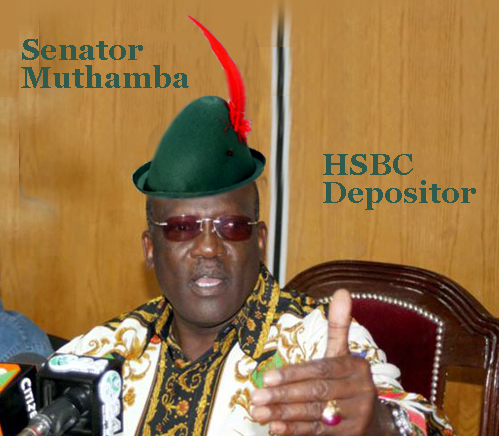 East Africans figure prominently among the leaked billionaires holding accounts with the Swiss HSBC bank, but there’s a lot more to the story.

The International Consortium of Investigative Journalists’ report of the hidden, possible illegal depositors of HSBC’s Swiss bank was released last week. As thousands of journalists mine the information it was reported yesterday that a prominent Kenyan Senator is among them.

There’s nothing in the ICIJ report to link any individual to illicit activities, although the report does explain how bank officials routinely advised investors ways to avoid paying taxes, among other methods of hiding wealth.

The report leaked information from 742 clients, but almost all of these are unnamed accounts as is the custom with high rollers banking in Switzerland. The “numbered” account is usually all that is known.

But true to form, Senator Johnston Muthama of Machakos opened at least one account in his name and eight others with other family member names. His total deposits of around $35 million seem unbalanced to his business interests in his area, but that’s impossible to prove.

His explanation to a newspaper in Kenya today was that the accounts were opened as business ventures with international capitalists and were related to his legitimate business interests in mining.

The remainder of the Kenyan accounts were unnamed and equaled $559.8 million. There were 286 Tanzanian accounts in excess of $100 million.

In today’s world there are a lot of rich people and I suppose not all of them got that way illegally. In any case. it’s not possible from the ICIJ report to prove any illegality by anyone, although the inferences are strong.

HSBC has agreed for some time to repatriate foreign funds to governments that can prove the deposits are illegal. This is a clever move by a big bank recognizing that “foreign governments” are usually controlled by the people who are its depositors!

The East African component of HSBC depositors is fractional when compared to those from the developed world, and Senator Muthama’s $35 million bank account shouldn’t give any of us pause. In the big pond of the wealthy, he’s a very small fish.

What is significant is that countries like Kenya and Tanzania are incapable of emerging from poverty in today’s world without mastering capitalism, whether they should have to or not.

Muthama’s stash is only one of hundreds — maybe thousands — from East Africa, which means that precious capital needed by East Africa is leaving it.

Several years ago professors at the University of Nairobi documented this horrible capital flight out of East Africa.

“Residents of the East Africa Community have more money stashed away in Swiss banks than those from any other region in Africa,” the report found.

The report said that more than $1.3 billion of capital generated by East Africa was at the time residing in Swiss banks.

A major reason East Africans as compared, for example, to the much bigger and more prosperous southern Africans may have more Swiss deposits is because southerners can grow their money at home often as well as abroad. In far less developed East Africa that’s more difficult: there’s less for very wealthy people to invest in.

As with this week’s expose, there was nothing in that 2012 report to prove illegality, and the 2012 report was not even trying to suggest it. Rather, it was pointing out that development requires capital and capital generated in East Africa ought to stay and be used in East Africa, not flee to Switzerland.

The ICIJ report is a national embarrassment to Kenya and possible political epitaph to Johnston Muthamba but it’s important to repeatedly acknowledge illegality is only inferred.

(Sort of the same way we wonder how a new Congressman can decorate his office like Downton Abbey.)

Secret capital in Swiss banks, on the other end, is clearly evil.