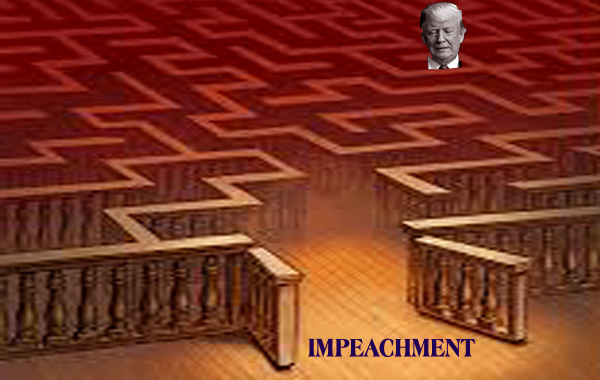 Hoisted by their own petard. I love that phrase and I think that’s what the Democrats are unfortunately being forced to do.

In Africa and other newer societies the body of law is less than in our “ancient” country (as one African commentator recently called us). That means two things: there’s less to consider and less to interpret.

The more it must be interpreted.

More clear is the event of the moment, impeachment. One of the best summaries of what’s happening right now in America was written recently by a researcher at South Africa’s Institute for Global Dialogue. Take a look: click here.

With the volumes of American law redefining and reshaping the meaning of “bribery,” with the mountains of equivocations set in law regarding the implicit nature of motivation, a schemer like Trump will trump any attempt to snare him in the law.

Today the Judiciary Committee is trying to craft as clear a charge against Trump as possible. It won’t be clear enough. America has too much law. America is too old.

But Democrats have no choice. They are the intellects, the ones who believe they have the master skills to remove an evil cancer in our society. They can’t hasten the election, like most every other mature democracy can, because the American constitution is too old and relied on as some container of first principals.

So America has boxed itself in: the only way to excise the cancer is to elect him out of office or impeach him. Time is untouchable. Cancer spreads, so time is of the essence. If you believe this there is no alternative but impeachment.

But using the old machine to clear the toxin is fraught with all sorts of risks, the greatest being it will blow itself up.