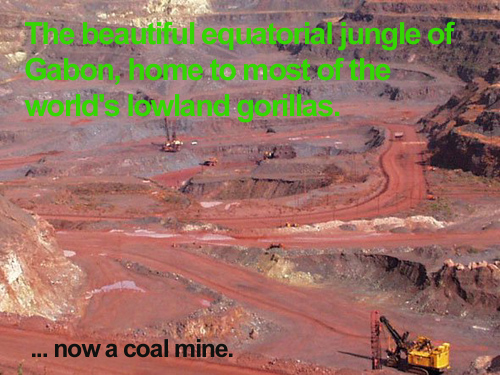 If you thought everything Canada is green and good, think again. Canadian mining is destroying Africa. And maybe destroying Canada.

The Canadian “extractive industry” as our Canadian cuzzes obliquely call it, is exploding. Literally, as GDP for Canada and as dynamite and gunfire in Africa. Numerous human rights violations across the continent have been documented against Canadian companies.

One of the worst incidents occurred in Tanzania in May. I’ve written about the North Mara gold mine before, operated by Canada’s Barrick Corporation. I think it how lovely now that the company’s own website lists some of the gravest allegations against itself.

In May Barrick admitted police aided by its private security forces shot to death 7 “intruders” and wounded others. Reports suggested as many as 1,000 people were involved. And clearly there is complicity by Tanzanian officials, which is now being investigated in parliament.

But it is the brashness of Canadian companies which stokes African ire. The CEO of one of Canada’s most aggressive African mining companies, IAMGOLD, recently told journalists in response to a strike called at one of his mines in Burkina Faso that he would crush the “illegal strike and as they will find out, will not tolerate anything that has a negative impact on our stakeholders.”

Well, that’s not particularly soothing PR for an industry blemishing the earth, and Canadians over the years were beginning to feel remorse. A year ago Parliament was about to pass Bill C-300, but the mining lobby and conservative Harper government managed to kill it. The bill would have imposed the same human rights regulations on Canadian companies operations in Africa as it imposes on those same company’s operations in Canada.

One unexpected result has been that groups as disparate as Burkina Faso mothers and Nigerian teachers are now suing Canadian companies broadside in Canada. The suits are so successful that there are plenty of lawyers to take them on.

So having lost that PR battle, and having lost all sorts of civil suits, the Canadian government has achieved a novel alternative.

The government has “developed a partnership” between many of these insidious mining companies and otherwise respectable NGOs. Here’s the three top:

A few seconds before this was announced it would have been thought an idea for the Onion or Daly Show. But it’s real. In effect the Canadian government has bought off otherwise good charities to polish up the image of its tarnished silverware. These organizations get up to a million dollars each to, in the words of WUSC CEO, “nudge along good practices.” Holy Smokes. Literally.

Each partnership is odious. Plan Canada’s mission as a principal advocate for child development has some explaining to do ever since IAMGOLD closed down operations at its Essakane mine in Burkina Faso due to strikes in part alleging illegal use of child labor.

World Vision, one of the most aggressive religious NGOs that I’ve often claimed is one of the few excellent ones in Africa, is partnered with the gold trolls, Barrick. I just don’t think they’re going to get even an ounce for the wise men.

It’s all such a monstrous if laughable window dressing. I heard recently that not-for-profits were hurting this year. How? For money? Or mission statements?