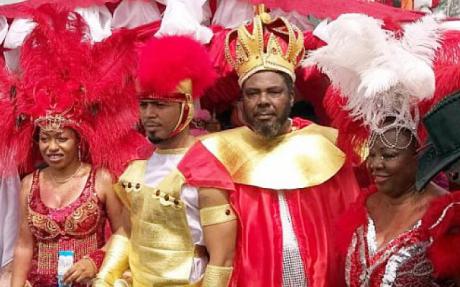 If you thought Rio’s Carnival or New Orleans’ Mardi Gras were big parties, take two: Nigeria’s Calabar festival’s climax is tonight and is the biggest music/costume/dance festival in Africa!

Calabar Carnival is the biggest gigantic collection of visual and sound culture in Africa. The scheduled events are so many that it takes 32 days of performances, which peak December 26 with the morning cultural parade and then December 27 with the Grande Finale.

Music and visual arts dominate, and everything is judged, prizes galore. About a dozen international musicians perform, and perhaps one of the most famous in the past was Haitian Wyclef Jean, who aroused the crowd by his impromptu performance “we have no terrorists in Nigeria” which unfortunately is not the case, particularly this year.

But with Africa’s other great festival, The Festival au Desert in Mali, essentially emasculated by area terrorists, Calabar now reigns supreme as West Africa’s greatest music festival. It’s significantly distant from the troubles in either Nigeria’s contested Muslim north or oilfields. Nevertheless it’s a pity that Africa’s extraordinary west African music has been so hampered by terrorism.

Preliminary contests earlier in the year shortlist 5 African bands which then come into town to perform in the grand finale contest. And these aren’t normal bands. Each “band” has up to 2,000 members!

And there are 10,000 “band members” involved in today’s Grande Finale march. The performances ends with individual performances by each of the bands, and then all 10,000 of them singing together!

Throughout the month-long event hundreds of organizations sponsor numerous other performances and activities including workshops and seminars focused mostly on all aspects of producing modern entertainment.

But there are also seminars on greening consumption, global warming, modern politics and virtually anything a sponsor wishes to do providing it can link to the current festival’s theme. This year, “Endless Possibilities.”

Up to 100,000 spectators and participants are in Calabar, today, although only 15,000 who can afford the ticket price of $30 get into the main stadium where the Grand Finale parade and blasting final band contest occurs. Watching separately will be 50 million views from around Africa broadcast by Nigerian television.