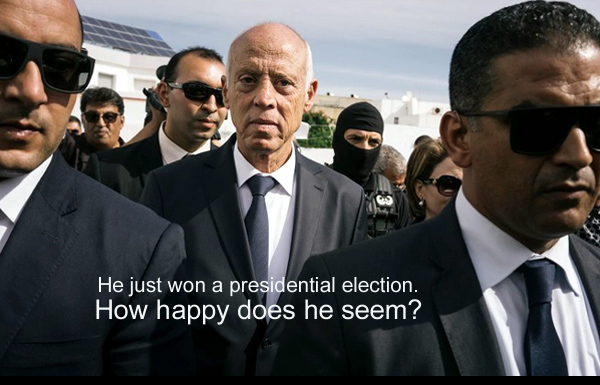 Right. Do all those dem candidates even know where Tunisia is? (Do you?)

The common wisdom borne of extreme caution is that the lovable insider will prevail. Guess what, that’s not happening. It didn’t happen in any election worldwide this year, and the latest one was in Africa, in Tunisia where it really didn’t happen Big Time.

Saeid was the Ultimate Outsider.

His challenger was a billionaire media mogul that many in Africa call “Tunisia’s Trump.” Nabil Karoui was also an outsider as far as elections go, and he had an astounding political ascent himself, garnering huge contributions and wide media attention while he was in jail!

The two were cast in the run-off after a hard-fought initial election among 26 candidates! Karoui polled the highest in the first round.

The Post characterized this final election with a quote from one 45-year old: “I am fed up with the political system.”

Taxes, health care, even defense – they don’t matter as much as “fed up with the system.”

In the end the Tunisian electorate decided even if Karoui had never been in politics, he was a stalwart, long-serving man of the “system.” That was true. He was a part of the elite that wheeled and dealt elections as much as businesses.

Both espoused nearly the same social and political goals, and what’s more, even the details and plans to achieve them! The one big difference between them was Saeid’s “vow to change the system.”

Saied didn’t just mean behaviors. Saeid wants to change democracy. Rather than the current parliamentary system he wants to devolve all government into small local units. (The lesser insiders last night in the debate want to change the Supreme Court; the insiders don’t.)

Each unit – village, county or small ethnic groupings – would elect officials, and those officials would elect the next tier of officials who would become part of the legislature.

Radical changes in the constitutional system are much easier in newer democracies like Tunisia than in the U.S., where constitutional change is almost impossible. So it’s a truly plausible idea in Tunisia.

But “being fed up” is universal. Defining Insiders and Outsiders is what matters.

Isn’t this what all countries’ “peoples” are saying? And might it not be true? What commonality threads all these multitude of systems together? Globalization, I think, and globalization based on capitalism – or at least the unregulated capitalism of our age. That’s my analysis, anyway.

But listen to the Tunisians. Pox on Insiders. Hallelujah for the Outsiders.