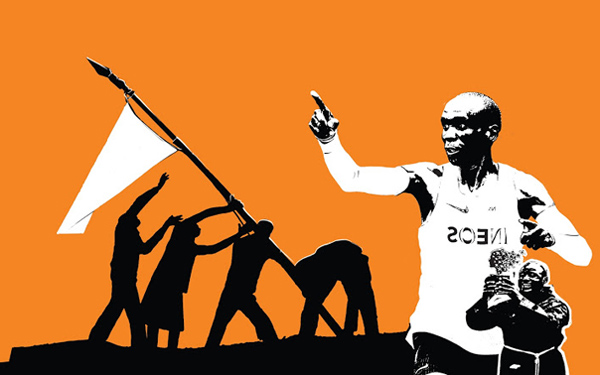 Who are your heroes? It’s an important question, particularly now when the world seems totally forsaken.

Today starts the Mashujaa weekend in Kenya. The stem, shujaa, is a straightforward, heavy Swahili word for “hero.” Kenya has many ‘shujaa’s to celebrate this year, in sports, literature, politics and academics. And in Kenya — seemingly unable to mend its tribal rifts – the country really does come together this weekend. The heroes come from all the tribes. It’s a time a citizen really thinks first of herself as Kenyan, and then something else.

There are a number of heroes in my own life, but what makes a hero?

“Mashujaa,” according to the executive director of Haki Africa, is someone who is pivotal in helping us to overcome life’s challenges.

For most shujaa this means first achieving “excellence in their [own] pursuits” and who then “dedicates their time and energy to make a difference in the lives of others.”

It’s understandable we neglect such people today, in such a selfish world. But there are many of them and they need our support to take us out of this darkness.

One of the most nefarious strategies of today’s evil people is to so dominate the moment that there’s no space for our shujaa to emerge. But think about it. That’s our problem. We prostrate to the Trumps, Big Business, social media, global banks, when all that’s needed is for us to take a few minutes to stop listening to or talking about the endless litany of their dark events, and find that shujaa who’s actually doing something good.

A few days ago Elijah Cummings was on his death bed – unreported that moment because of all the more “breaking news” bad stuff that was happening. He used some of his last energy to sign subpoenas against officials who were deporting foreign kids receiving life-saving treatments in America for diseases that couldn’t be stayed anywhere else in the world.

Whoa. Doesn’t that inspire you? The man knew he was dying. His energy was zapped, but what was left of it went to what the practical or expeditious critics argue was fanciful in our world of war.

So Elijah Cummings is now dead. We don’t know if his subpoena will prevent a Guatemala youngster with cystic fibrosis from also dying. But Cummings’ spirit has infused so many people that I don’t doubt it will ultimately reverse war.

An Arkansas farm boy who lead his middle school while helping an aged grandfather till the fields because his father had been killed in the Korean War. Every stalk of corn mattered, but he let me plow the crookedest line of corn ever planted.

Madison, Wisconsin’s youngest ever elected judge, who marched in Selma barely a teenager and when unjustly arrested with me in racist 1970s Alabama insisted we fight our summary conviction and sentence of $10.50.

The “librarian” of the Bitburg air force base in Germany, awol in our Paris apartment, painting scenes of the Da Nang fighting all over our living room walls.

A Congo woman and her daughter who despite my protests as the propellers whirled sacrificed their seats on the last 18-passenger airplane to leave Goma as the Rwandan genocide began, pushing me and the remainder of my tour group into the aircraft so that we could flee the fighting.

A pastor in the ghetto of Chicago who convinced a group of 8th graders I pried from their golden desks that their peers on Broadway weren’t all thieves and terrorists.

E.O. Wilson who in his diminutive way talking about ants explained to me two decades in advance why Trump would be elected.

My list is long, and I’m sure if you think about it yours will be, too. (Email me, or leave remarks about your most important hero.)

My greatest hero was a 24-year old pretty shy little girl. We found ourselves together in very remote western Kenya, just assigned as teachers to a boys boarding high school that had no women even as cleaners or secretaries.

The day before school started a student leader told the Headmaster, an Irish priest, that they would kill her if she walked into class.

I joined the priests trying to convince her to leave. When she refused, I felt the only thing I shared with this woman was being 24 years old.

The next morning I, the boys, the janitors and the two priests who ran the school all hunkered down in their houses and dorms. Nothing stirred on campus but the dry season breeze. 400+ men all peered out of the cracks of doors and windows at the school room designated for history.

This was the age of Idi Amin. We were on the border with Uganda and many of the boys came from Uganda. I know many of them sneaking a glance around the corner of the dorms were holding machetes.

We all watched her walk defiantly, head down as if looking at the notebooks she was cradling, across the entire vacant campus into her class room. When both of us left two years later she was the most revered teacher St. Paul’s Amukura Secondary School ever had. She’s my wife.