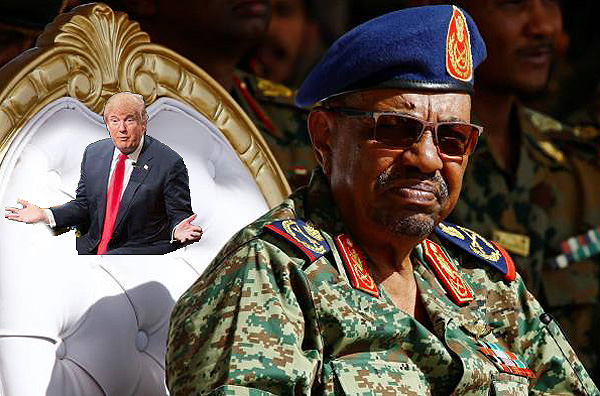 Trump is expected to lift sanctions on The Sudan today, in place for 20 years and indeed a complex policy with a checkered history. Trump’s move is bereft of any ideology intended simply to get government out of business. There’s oil there, you know.

Whether this ideology-free policy, business first, policy will have any value except to increase the bottom line of ExxonMobil is unlikely. Appropriately, the lifting will be announced by Tillerson, ExxonMobil’s former CEO.

Sanctions were first imposed by Bill Clinton in the 1990s because the president, Omar al-Bashir, offered sanctuary to Osama bin Laden. (Do you remember that the U.S. was pursuing bin Laden before he blew us up?) Later Clinton lobbed a cruise missile into the presumed headquarters for bin Laden in Khartoum. (It didn’t help. He still blew us up.)

A decade later Republican George Bush added more sanctions because of the genocide al-Bashir carried to the rebellious province of Darfur. Bashir was later indicted by the World Court for those crimes against humanity and remains a fugitive unable to step into any foreign country without the fear of being arrested.

By the way, he also continues as Sudan’s president.

In the midst of all this conflict between al-Bashir and The West, an opening perceived from clever diplomacy wrested a quarter of al-Bashir’s country into a wholly new independent country, the South Sudan.

There was enormous jubilation by The West that had supported the rebels fighting Bashir in that area for a generation. The icing on the cake was that the rebels claimed to be Christian (or, as a footnote, animist but you know just like they are in Malaysia really Christian animists), and al-Bashir’s kingdom was Muslim.

But Bashir didn’t seem to get what he expected from releasing South Sudan from his hold. Sanctions continued. But perhaps Bashir did get what he wanted from the deal, after all.

First off, the South Sudan has become a completely failed state, so much so that not even ExxonMobil is able to extract some of its tons of oil. Christians they may have been once but having thumbed their noses at The Pope and expelled missionaries, they are no longer. The West has poured tons of money into an open hole of corruption and seemingly uncontrollable fighting that they “just can’t explain.” This after The West spent twenty years dumping high-tech weaponry into the deserts there. So Bashir got peace, and The West got war.

And now with Trump’s expected move today, Bashir – the world’s most ignominious fugitive war crimes criminal – will get new business from The West.

Bashir always knew what he was doing. Africans are masters at the long game.

There are still a few people surviving this administration that are pushing back on Trump’s preemptive move. They’re trying all sorts of things, like following the law. Congress actually passed a law about this and Trump’s move may violate it.

So what? Trump doesn’t know, or care, or mean to do anything but increase big business’ bottom line. That’s the only policy materializing out of his cluttered regime. If laws are being broken, give the liberal press the complex story detail by detail and keep them busy putting the puzzle together.

While big business marches forward. In America’s world, today, I don’t think that’s a very long game. In al-Bashir’s world it’s all working out just as planned a generation ago.