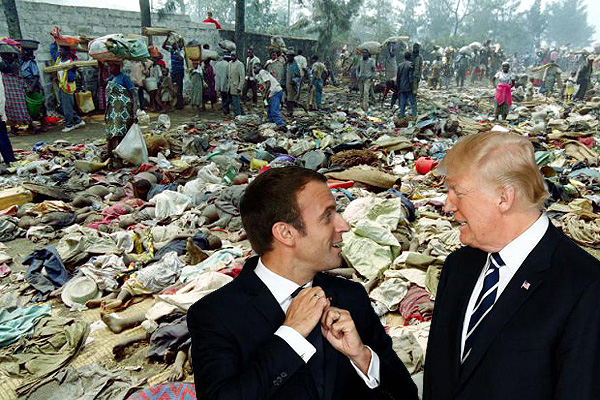 Last night Trump took a “fun trip” to a “ a dystopian land of terror… a city so, so, so out of control, so dangerous.” “France is no longer France,” Trump recently pronounced.

It’s hard to believe that someone who confuses WWI with WWII and can’t even name the advisories of either one is joining the centennial celebrations of WWI. What’s behind this meeting?

The neo-cons controlling Trump. Africa is the reason for this meeting. Let me explain.

Whatever prejudices you hold against the French, their so-called uppityness, abruptness or dismissive nature, there remains one of the strongest ties-that-bind between any two societies on earth: militarism.

No other country in Europe is so defense-oriented or aggressive in world conflicts. This notion that “might makes right” has bound France and America literally from their revolutions, when in fact they exchanged principals to fight for each other’s independence.

The world today is focused on the Mideast where the greatest current conflict continues. But both France and the U.S. see Africa as having a worse potential for extended conflict.

France has believed this for more than a century. It was the only power to divest itself of its colonies without wholly ceding their independence. The obligations that all its former African colonies except Guinea continue to honor with France strike most free-thinking people as antiquated at best, immoral at worst:

● France manages and manipulates the West African currencies the same way our Federal Reserve manages ours.

● France retains the right by treaty to intervene militarily on whichever side it chooses in all its former colonies in Africa.

● French police (the “gendarme”) retain ultimate power by treaty to intervene in any domestic disturbances in its former African colonies.

● France soldiers (the “Foreign Legion”) retain jurisdiction over all the militaries of its former African colonies. More than 36,000 legionnaires are currently deployed throughout west and central Africa.

This “sort of independence” independence was crafted by De Gaulle in the 1950s. It led to the terrible Vietnam War, then later the wars in Rwanda and The Congo and the blood diamonds civil wars of just the last ten years.

I don’t think it simplistic to draw conclusions from this. The policy was wrong and routed in the notion that emerging nations were wayward: dangerous cauldrons for terror, and that only “might makes right” could keep them in line.

France’s travails in Vietnam, Bosnia, the Mideast and most recently Africa are truly far greater than America’s equally horrific travails in mistaken world involvements. The blood diamond wars killed many more people than the current conflict in Syria, and of course the only other genocide anywhere near comparable to the Holocaust was the Rwandan genocide, of which France – aided by the U.S. and Clinton – were arguably wholly responsible.

French people are as split and vitriolic towards one another on this issue of militarism as we are in the U.S. And today it’s all pointing to Africa.

France is stretched so thin in Africa it’s comic they still wield power. They’re tethered to military basis in Mali, Chad and outposts elsewhere that they can’t and haven’t paid for, for decades. Guess who has?

While U.S. funding and hardware support of the French military stretches back to the 1960s, it was Obama that brought it all out into the open when he created our ninth giant military command, Africom.

During the Obama years, French and American forces were in the forefront and often only so in the conflicts in Somalia, the Central African Republic, Chad and Mali. Without America, the French-led mission in Africa to “hold things together” often now described as “fighting terror” would collapse.

French foreign legionnaires are better than Navy Seals. The DGSE and DRM are far superior to the CIA in Africa. Most importantly, France still provides enough sovereignty in Africa to justify unilateral military action.

But France can’t or won’t but hasn’t paid for all of this for decades. Guess who has?