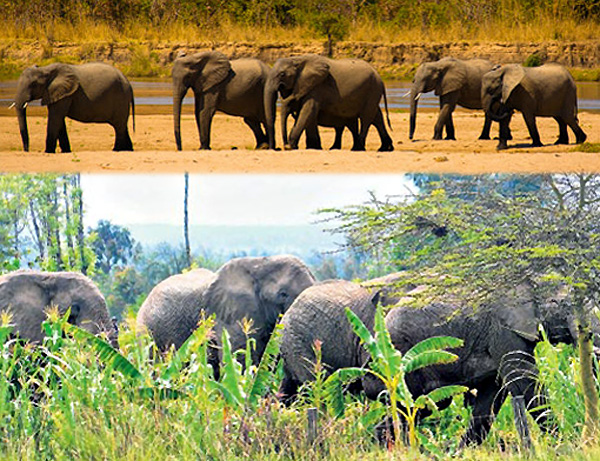 After elephants “terrified” a Kenyan politician campaigning near Tsavo National Park, the candidate told supporters the government has done “Very little… to make sure human-wildlife conflict is addressed.”

A few weeks earlier Kenya’s proud new SGR train plowed into a cow in the same area because elephants had torn down the fence along the rail line.

The Frankfurt Zoological Society probably has the best models for addressing this conflict and is applying them in both Zambia’s Luangwa National Park in southern Africa and Tanzania’s Serengeti in East Africa.

It’s a common sense approach: Retrain farmers as staff for safari lodges and local airports. This can then lead to vested partnerships by local communities in new tourist facilities as demand grows. This works, of course, only when the demand grows and is sustained by tourists, and this is exactly what happened in Luangwa National Park.

So in my safari to Luangwa a few weeks ago we enjoyed interacting with our guides, spotters, waiters and lodge managers, most of whom evinced a pretty decent standard of living and excellent education as a result of this model working for the last two decades.

On our way from the airport our chief guide stopped by his house to deliver his wife some fresh veggies he’d picked up near the airport. Our principle ranger on the night drive told me he now gets weekends off so he can travel to his home nearly 40 miles away. Many of the actual lodge employees work shifts just like at hotels here, and live at home, not in the lodges.

A local theater troop performed for us an original play that they take to area schools, trying to discourage high school graduates from fleeing to the cities for even better jobs.

All up and down the main street of the town of Mfuwe, just opposite the great national park over the Luangwa River Bridge, business has prospered. There are hardware stores, cell phone distributors, furniture makers, even appliance distributors and I saw one used car dealership.

This is good if challenging development. It was working fine for the last three decades but now there’s a significant wrench in the works: Until the last decade the elephants of Luangwa were either declining or stable in numbers, mostly because of poaching. After poaching was controlled, the population began to increase. Fast.

As we left the park for the airport around eight o’clock in the morning, we crossed the great bridge and looked down the magnificent Luangwa river. There was a beautiful line of elephant crossing from Mfuwe into the park.

They were all male. There were no young. I confirmed with the guide that they were the evening hooligans, the elephants that leave the park at night to raid the farms outside the park and then return in the morning.

My guide initially indicated little sympathy for the farmers who he berated for having had the temerity to start farming “so close to the park.” Of course their farms had been productive for years – when there were fewer elephants.

When pressed he admitted that eles marching to the watermelon, corn and bean farms don’t follow the street signs. “People’s homes are being crushed,” he said timidly.

Luangwa, like Tsavo where the Kenyan politician castigated the government for not being able to reign in the world’s largest land animal, elephant populations are on the rise. True, there are many areas in Africa where poaching is decimating the jumbos, as was once the case in these two areas.

Which, perhaps, facilitated the opportunity for sustained interaction between people and beasts. But things are changing, now, in Kenya and Zambia, as the monsters multiply. Retraining elephants isn’t on the table.