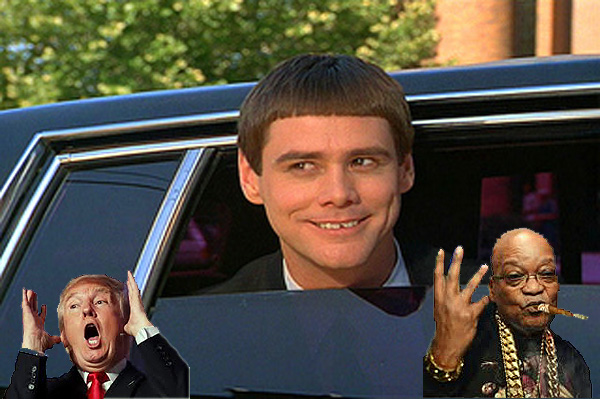 South Africans delightedly use Trump as a global explanation for their own Jacob Zuma, but if we get distracted by colorful individuals at the helm of complex political systems imploding all around us, we’ll have created nothing to fill the vacuum that follows their recklessness.

This is the time in America for finally righting health care with a single payer system, the time for intervening in capitalism’s intrinsic income inequality outcomes; the time to salvage what’s left of our treasured educational skills.

South Africa waited too long. Their revolution over apartheid and their first angelic president set them on the most amazing paths in human history. The opportunities they began to exercise at the end of the last century were as great as ours are now.

The South Africans had an excellent game plan they’d worked on a long time: Their new constitution was one of the most magnificent documents in human history. So for the term of Mandela things went rather well. But the constitution had no planned followup, no set of laws and most importantly, no individuals other than Mandela capable of expressing it. The party of Mandela, the revolutionary party that was as old as Mandela himself, was bereft of any skills to implement its grand constitution. Great plans. No tools.

Mandela gone, apartheid gone, the vacuum ensued. It was filled by an increasingly doofus-oriented set of leaders that has culminated in the brownest doofus of all time.

In America it happened a bit faster. We expected – in fact we craved “change” so much that we got exactly what we asked for: neither a Republican or a Democrat, instead an “orange doofus.”

Donald Trump is copying almost step-by-step the muddied moves of The South African president, Jacob Zuma. What’s happened to Zuma happens to Trump, and what may soon happen to Zuma might eventually happen to Donald as well, and neither outcome makes things better.

After nearly eight years in power having weathered literally hundreds of complex scandals Zuma might be resigning at last, forced out by his own second, Deputy President Cyril Ramaphosa.

An important faction of his own old and beleaguered party, the ANC, has “offered to raise R2 billion for Zuma in exchange for his cooperation.” That’s more than $100 million and includes immunity against prosecution for all the charges against him.

Zuma’s list of scandals is remarkably similar to Trump’s:

Funding a personal mansion from government coffers; summary if illegal firings of high civil servants; reactionary pronouncements that tanked the markets and treasury; womanizing in public… Each time Zuma retreated from public reprobation with a hands-up “I meant no wrong” and “wouldn’t anyone else in my situation do the same?”

Besides, citizens mistrust the adjudicators of wrongdoing, whether the courts or other aged political institutions. Authenticity is all that they trust: It’s OK if you’re wrong, just so long as you don’t pretend not to be. It’s a powerfully contrarian belief that ultimately the doofus incapable of artifice will stumble into making everything right.

A sort of ironic honesty in stupidity. Ultimately the Republicans will dump Trump. See what’s happened in South Africa:

Ramaphosa started with gentle invocations that they had better quickly and completely “get rid of the greedy and corrupt.”

Finally the country’s elite turned to Ramaphosa instead of Zuma. Wednesday the Deputy President publicly decried the “corruption that has damaged the ruling party.” That was a day before Zuma was offered the payout and immunity.

Why do I see this presaging a trumped Trump?

Trump like Zuma is a populist who stumbled into misery because he beat a system by becoming a part of it. In the end the system will dismantle them both. The law won’t get them; the systems will subsume them.

When Zuma goes, when Trump goes, what’s left? Nothing changes. Ramaphosa like Pence is a nice if mysteriously suspect guy. There might be a period of stability. Our legal systems are filled with billions of periods. Distracted by our respective soap operas we fiddle as our systems burn to the ground.