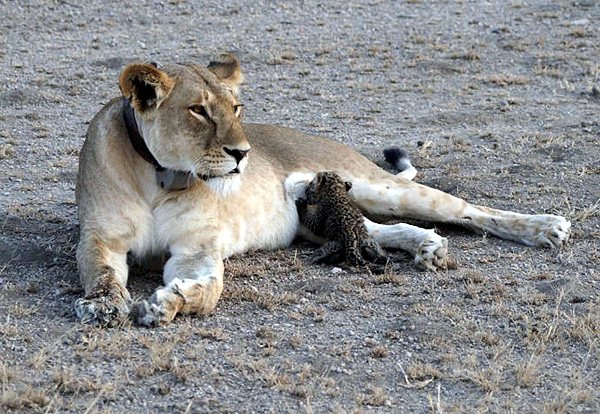 I’ve written about the catastrophic decline of lions, but recently we learned of one of the weirdest wild animal behaviors ever: inter-species nursing! Combined with several years ago, when a lionness adopted an oryx (!) in Samburu, I think we’re seeing nature desperately trying to evolve as fast as earth’s temperatures warm.

A week ago a hidden camera in the Ndutu area of the Serengeti photographed a well-known female lioness nursing a several-week old leopard cub. Lion and leopard are mortal enemies.

I remember traveling once with my kids in the Serengeti, and we decided to follow two lionesses prowling an area near the Grumeti River. Along the river are high yellow-barked acacia trees and as we were casually following them casually walking along the river, all hell broke lose.

The lions noticed in the deep cover of the tree top an agitated leopard. She should have just lay there silently, but they freaked her and she apparently got up and moved about. So they noticed her.

Lions don’t climb very well. There are all sorts of myths throughout Africa about certain climbing tree lions, but the fact is that unless the branch is good enough for this old safari guide to climb up, they can’t either! This tree was normal. There were no low-hanging branches.

So try as they did to jump up the trunk and further harass the leopard, they couldn’t. The growled and muttered and tried multiple times but clearly the leopard was safe in the tree. Until she gave into her nervousness.

She just couldn’t stand the harassment. She went back and forth and up and down until finally she thought she saw an opening. She leapt down and made a run for it, and the lions got her and tore her to pieces. They didn’t eat her, either.

The NGOs working in Ndutu think this collared, well followed lioness had just given birth herself, but for some reason lost her cubs. Often leopard cubs are born in the trees, and often they fall out of them. Coincidence?

As Emma Bull says, “Coincidence is the word we use when we can’t see the levers and pulleys.”

Indeed it was probably coincidental that a leopard cub the same age as the mother’s lost lion cubs fell on her. But I think it fair enough to agree with wildlife biologists that in days past the mother lion would not have begun nursing the alien cat.

Why now? It’s complete speculation on my part, but 20 years ago when the big cats were continuing a stretch of increasing populations that began when wildlife statistics were first being gathered, there was no need for any of this exotic behavior.

The lion who five times adopted an oryx in Samburu National Park was the first unusual lion nurturing story: That was in 2002, just about the time that East Africa’s very predictable weather was being torn asunder by climate change.

It’s convenient to think of this as a “mother/orphan” story, but lions don’t have emotions and leopard babies don’t crave motherly attention, they need milk. I see this as natural selection working overtime.

“It is very unlikely that the lioness’ pride will accept it,” the Chief Conservation Office at Panthera, which publicized the incident told the press.

“Lions have very rich, complicated social relationships in which they recognize individuals—by sight and by roars—and so they are very well equipped to distinguish their cubs from others. If the rest of the pride finds the cub, it is likely it would be killed.”

Stay tuned. I’ll be at Ndutu in three weeks.