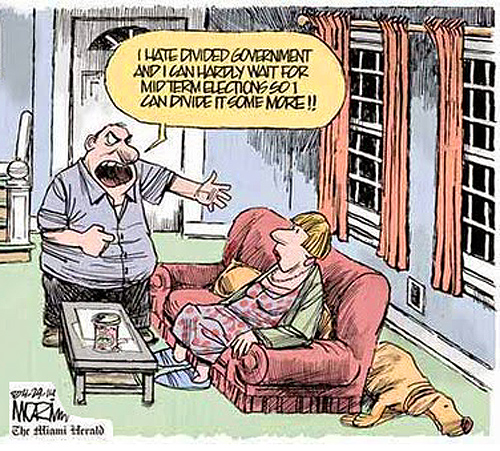 LETTER TO MY AFRICAN FRIENDS

Here’s what happened Tuesday in America:

An antiquated governing system flipped between two irreconcilable ideologies, because those ideologies are so far apart that compromise isn’t possible.

Many of you – I’m thinking particularly in Kenya – want to replicate America’s governing system. Don’t. It was great for the 19th and 20th century, but it doesn’t work in our high-tech, globalized 21st century.

Yesterday’s politicians and media analysts are absolutely right that “America is yearning for compromise” but they’re absolutely wrong that “now there’s hope the two sides will work together.” Our political structure has evolved to prevent compromise, so while we all want it, we’re not going to get it.

Since about a generation ago, “left” and “right” have moved too far apart from one another to be able to compromise within our system of government. This isn’t a failure of democracy, it’s a failure of the governing system to reflect democracy.

So gridlock will continue. Obama will stick to his positions and no substantive laws will be passed, or he will concede Republican positions. The two sides won’t each “give a little.” Neither side can: the positions are simply too far apart. So all legislative outcomes will simply be reflections of one side or the others ideology.

My ideologies and Ted Cruz’ are irreconcilable, but we are both gaining support. There is nothing left of the middle in America. I’m not sure this is in itself bad. The “middle” is often nothing more than a “muddle.” In many places in Europe widely divergent clearly opposing parties manage functional government through a parliamentary system. America is unable to.

Whether it be on human rights, national security and wealth distribution, compromise isn’t possible: The difference in opinion is too great.

Today’s American elections are structured to achieve a knockout punch. Last night was a big Republican win. The Democrats will have their turn, again, and then the Republicans again, while America sinks further and further behind China and India and much of you in Africa.

The demons are three: an executive presidency, the rules of candidate campaigns and a little understood process called gerrymandering.

By the way, the American public as a whole is much more unified than our elections make it seem. In Tuesday’s election, “ballot initiatives” and “referendum” – policy questions put to the electorate as a whole – received massive support : redistributing wealth (“minimum wage”), protecting human rights (“anti-discrimination”), decriminalizing the poor (“legalizing marijuana”) among many others.

But under America’s system, today, these are rarely allowed to come before the voters and often then only as recommendations to their legislators rather than methods of creating law.

And under our broken system of government, the public’s will can’t be manifest well. So while the public passed those few referendum, at the very same time they elected powerful legislators who promised to oppose those exact same referendum.

So … nothing gets done. Gridlock or schizophrenia, doesn’t matter.

You in Africa have a unique opportunity to see how wonderful democracy has been for a long time in America. Use your fresh ideas to figure out a way to sustain it. We’re failing, here.