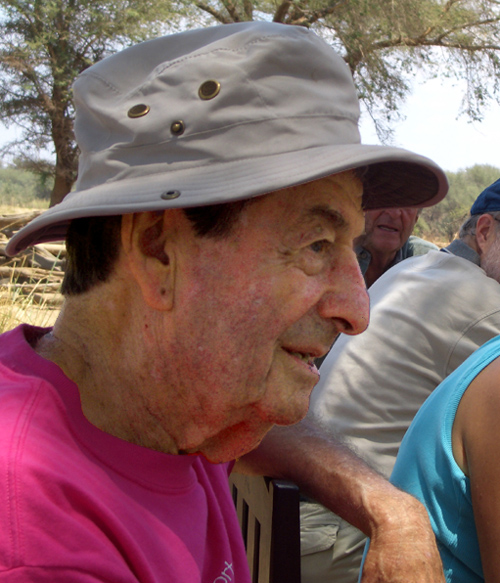 Today I’m on my way to Africa for seven weeks of exciting safaris and consulting, and this time it’s so very special because of a certain great person joining me.

I’ll be guiding the Director Emeritus of Lincoln Park Zoo and some of his friends, in Cape Town and Botswana. Dr. Lester Fisher is 91 years-old and if I recall correctly, this is his 6th “Last Safari Ever!”

My first safari with Dr. Fisher was in the 1980s. Since then we’ve been to Africa almost two dozen times together, and often on some extraordinary and very unique voyages: into Kivu province in The Congo, countless gorilla trips (since he’s the world expert on captive gorillas), multiple times to East Africa including with his own family, Ethiopia, Namibia, Zambia – you name it!

His popular book, “Life on the Ark” describes many of our adventures.

I remember on his 2nd or 3rd “Last Safari Ever!” I had as I’m wont to do kept the group out far too long on a game drive the last day on safari. And it was during a drought in the Serengeti to boot.

It was extremely hot and dusty. We should already have been around the campfire with a Tusker in hand, but we were only at Naabi Hill, still another hard hour’s drive away from camp.

Les was already up there in years, and I saw him get out of the car to walk to the restroom. I raced after him and waited for him to return as I surveyed the dour faces of the others returning slowly into the vehicles.

I was terribly worried that this over zealous last game drive wasn’t exactly “icing on the cake.”

Les came out and I stepped next to him as we ambled to the car, waiting for any remark whatever from this man who was above all known throughout his career as extraordinarily diplomatic. But I was fully expecting the worse. He said:

“What do you think about bringing my family back in June?” And we did!

Les’ evening chats around the campfire are legend. With time the volume of knowledge he acquired of the zoo world, the animal world (and by the way, the people world) became truly astounding. He is a veritable encyclopedia of people’s interaction with wild animals.

And he put me in charge of his safaris. I have no greater honor or pride.