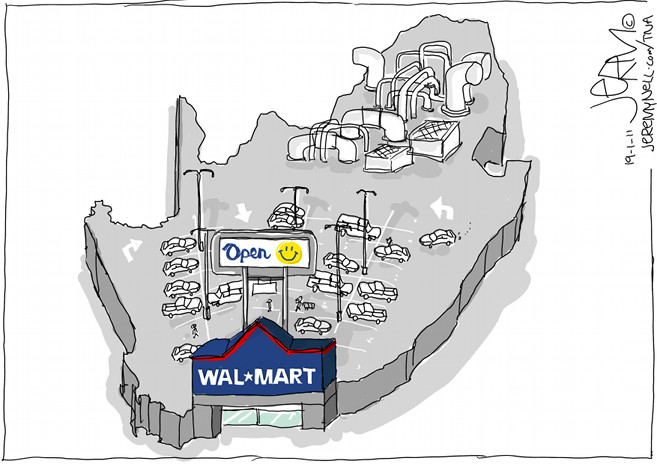 Will South Africa make Walmart nicer? Stay tuned to how all of us should be treating this behemoth of capitalism.

This week the local firm that will be acquired by Walmart when the South African government finally approves the takeover as expected, announced more or less, to hell with procedure, they were going to continue acting like they were already taken over.

It’s not illegal. Massmart Holdings can transform itself however it wants, but the transformation can’t implement Walmart procedure until the deal is finally approved. The net result of this limbo is that it’s costing Massmart some of its expected profitability.

And if the deal is ultimately not approved, Massmart stands to be in rather deep trouble.

Legally today, Walmart owns 51% of Massmart, but other than placing the majority of its board members, it cannot completely function as the Walmart we all know and hate (oh, sorry, or love). South African law distinguishes from majority ownership and corporate control so that even minority South African equity usually governs corporate practice of foreign-held firms.

Massmart can, for example, reorganize its supply chain towards China. But until the Walmart deal is completely approved, it will not be able to place those cheaper China goods on its shelves for customers. It can start the planning and even construction of new stores, but until the tax breaks Walmart negotiated are in place, brick and mortar could make it bankrupt.

When Walmart made the move to acquire Massmart there was significant resistance in South Africa. Opposition was strikingly traditional: Labor organizations were worried that it will reduce jobs and job pay and benefits, and small retailers were worried they’ll be drowned out.

But the acquisition, $2.4 billion, doubled South Africa’s foreign investment in a single fiscal year. That’s kind of hard to ignore. So the process of approval went rather quickly, less than a year, and last summer the final hurdles were overcome and the deal got the South African stamp of approval.

Pending appeal. That’s where we’re at right, now, the appeal.

But the size of the investment is just too big to refuse. Last week the U.S. Chamber of Conference pointedly said to South Africa that if Walmart is refused, it will have a catastrophic effect on foreign investments in South African for years to come.

And there is really one awfully interesting probably good reason that no one thinks the deal won’t go through. It does not mean, as it means in America, that Walmart stores will not be unionized. Walmart has caved on this, and it’s an incredibly important exception.

In fact, it’s remarkable. Low wages and poor benefits is a hallmark of Walmart in the USA. In South Africa that may now not be the case, although the agreement struck with South Africa’s powerful labor unions is not totally ideal.

Massmart employees will likely lose some wages and benefits: most importantly, a type of tenure that tended to guarantee a job with longevity of service.

But it’s still remarkable. First for the obvious reason that it protects the worker. But almost equally because it reveals the hypocrisy of Walmart’s claim here at home that union involvement wrecks their business model.

So if it works in South Africa, any reason it can’t work, here?