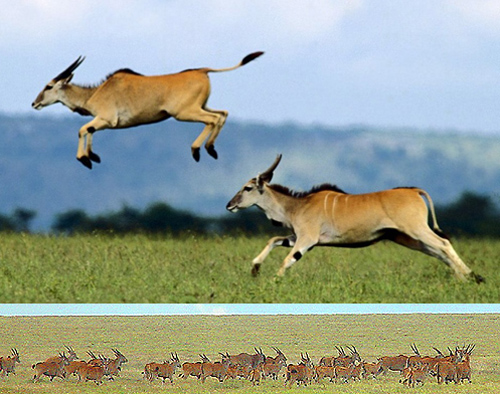 Yesterday eland was photographed in Nairobi National Park. It’s enough to make you believe the wilderness will be preserved!

There is hardly anything as anomalous in the wild as Nairobi National Park. Three of its four sides abut some of the highest low-rise human population densities on earth, including some of its most truculent slums. Its main water source, the Athi River, is fickle and destructive and often terribly polluted.

Yet this biggest of Nairobi’s parks still manages to sustain big game like lion, zebra, hartebeest, impala and eland, the biggest antelope on earth.

Imagine taking the narrowest side of New York’s Central Park and extending it over the Hudson, over (or under) I-90 and eventually into the Jersey forests. That’s what Nairobi National Park is like, a narrow southwest side gingerly extending towards the wilderness near Amboseli past concrete factories, giant warehouses and manicured ranches.

I think of eland as a real indicator species, but not in the traditional sense. Normally an indicator species is a fragile one, an animal or bird that is endangered by shifts in its ecosystem. The eland is different. It’s one of the most adaptable on the big game.

In the wild and seemingly endless plains of the southeast Serengeti, somewhere west of the big Lemuta Kopjes, hundreds of eland in family groups that size roam with the greatest timidity. Though each animal approaches 1600 pounds, they are extraordinary shy.

As we approach within a mile, they start running away, and they’re amazing runners. Almost without moving the rest of their bodies an inch, the legs start trotting as if the rest of the body is resting on a railway car. The feet go quicker and quicker moving the giant animal upwards of 30-35 kph.

Then, one – often the leader – leaps! This giant animal can leap 8-10′ into the air, creating this graceful arch over the plains. Soon they’re all leaping that from a distance looks like a line of boiling and popping cooking oil.

Rarely in the wild do we get within a mile or two.

Yet eland can be domesticated easier than any other antelope! In fact there was a period when Kenyans tried to farm them. The problem was that the meat wasn’t very tasty. But like a wild horse, once captured and fenced the eland becomes nearly a pet.

The eland in Nairobi National Park are very tame and according to one observer, now confined to the park, too weary to leave through the narrow corridor southwest. Technically, they haven’t been captured or fenced since the park is fenced on three sides only. But for all practical purposes they have been fenced by a rapidly growing human society.

So instead of leaping away, they are posing for pictures!

The Nairobi National Park is no San Diego Wild Animal Park. It’s much bigger; it has a much greater diversity of wildlife that benefits or suffers from the radical changes in climate, today; and it actually has far fewer visitors.

But it is absolutely the best, and surprisingly so, of the earlier wild. And the fact that we might have lost the eland’s leap for its presence might just not be so bad.