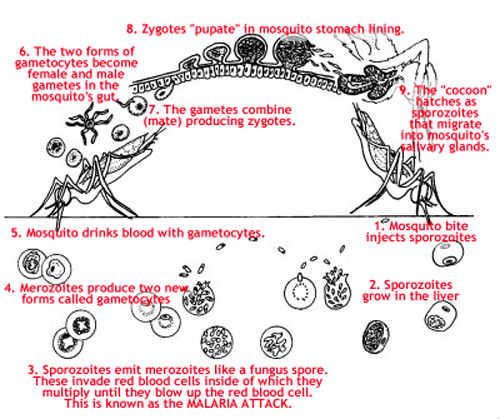 The greatest of evolutionary battles is between man and his diseases and a recent genetic discovery about malaria gives man a new flank to attack.

Last month researchers at the Centre International de Recherches Médicales de Franceville in Gabon collaborating with French laboratories published an amazing discovery about the genetic makeup of malaria. Their findings could open up an entirely new front for the attack against the disease.

As we learned this past week in Texas, the might of the developed world’s mastery of pesticides has kept malaria and other mosquito born diseases mostly at bay.

Malaria was essentially eradicated from the U.S. by the middle of the last century through extensive use of DDT. Many in the developing world argue for the use of DDT right now in Africa, but control of the substance remains with the developed world that has decided it’s too toxic a pesticide.

That debate is furious but there is strong evidence to suggest DDT might do more harm than good for two very interrelated reasons.

The first is that systematic spraying of the sort that occurred in the U.S. would be too hard to implement in Africa’s most malarial areas, which include sprawling slums and extraordinarily remote wetlands and swamps.

DDT’s toxicity isn’t in dispute: Numerous species of bird, insect and even plants could be eradicated if used. But in light of the terrible plight the sickness strikes every moment in Africa, the world might be willing to lose a few species of bird, insects and plants, but not if the implementation plan is as uncertain as it seems it would be.

Particularly if other remedies for malaria can be found.

Malaria isn’t just a single thing. It seven different life forms, like caterpillars and cocooned pupas and butterflies, but more than double that butterfly formation. The one form that does us damage is the sporozoite which produces the malaria attack.

But all other six forms have to produce and cycle to produce the sporozoite, and just that amazing transformation in an evolutionary sense is absolutely mind-boggling.

Remember, evolution is chance. Imagine the billions, trillions, godzillions of chance mutations that occured on each of the seven life forms meaning we have a permutation of godzillion to the seventh power (which I think is still godzillion).

Anyway, I hope you catch my drift. This is an amazing evolutionary development arguably as complex as many of the most complex life forms on earth, today.

But consider this after you catch your breath. Each life form’s mutated chance change produced some type of response in the disease’s host. Maybe, like sickle cell anemia, the sporozoites slides off the red blood cell so can’t infect it. Maybe another godzillion defenses (many like sickle cell anemia aren’t ideal) occur.

So there is this back-and-forth over time of the disease and its host (including man) trading punches. To date, malaria has won.

We know that apes and chimps get malaria, too. But we didn’t think until this new research that anything other than creatures in man’s family tree got malaria.

Wrong. The new research reveals that the greater spot-nosed monkey gets malaria. The guy is a primate, but we know from DNA research that he is far away from the line of primates that produced chimps, apes and man.

That means that malaria was doing its dirty work before the homonids line evolved from earlier primate forms. And that means that the malaria had to have evolved in some type of parallel way to homonids, and separately, to the greater spot-nosed monkey.

And that means if we can study the detailed difference between greater spot-nosed monkey’s malaria, and hominin’s (man’s), then we might find the point in the complicated life cycle of the disease that is most vulnerable to attack, the spot that makes human malaria distinctly human.

Perhaps it’s a gene in the human malaria that binds to hemoglobin. We’d have never known to look for that gene (among untold numbers of genes) if it wasn’t pointed out to us because it doesn’t exist in the monkey malaria. It’s very likely that that unique gene is of critical importance to the whole malarial chain of events that we might then be able to interrupt.

Go ahead and scratch your head. Read this wonderful summary about malaria that is better than mine. And then, think about it. It’s incredibly fascinating.