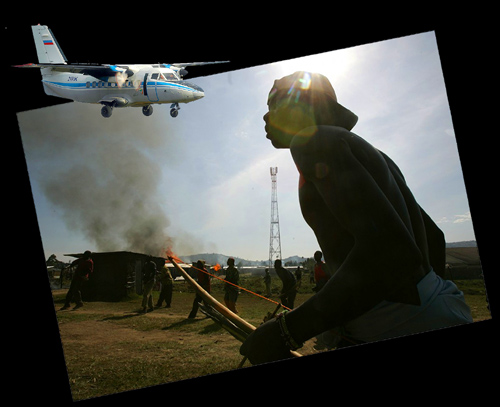 As of this morning four tourists are reported dead with several others still in critical condition after a scheduled flight aboard of Mombasa Air Safari LET aircraft from the Maasai Mara to Mombasa crashed on take-off.

Forty-eight Kenyans were killed in ethnic clashes near the town of Mandera in the arid Tana River region far east of Nairobi.

The two quite different incidents both reflect Kenya’s growing strain as it prepares for critical elections next March.

The Mombasa Air Safari crash was of a Czechoslovakian made, Soviet-styled LET aircraft. LET aircraft (of a variety of different sizes and types) has a horrible safety record with twelve accidents and 424 fatalities just this year alone. It was a cheap aircraft to begin with that became even cheaper with the breakdown of the Soviet Union. Almost like bad weaponry, LET aircraft have been showing up more and more in Africa as lax aircraft regulation mixes with strained economies.

The ethnic clashes which have been mostly reported in the world press as revenge killings by one ethnic group against another for disputes over water resources and range rights is actually only the tip of the story.

Kenya has redistricted itself in preparation for next year’s elections under the new constitution. Multiple smaller districts have been consolidated – as I believe they should – to create a truly more representative parliament.

And one logical outcome pits former established politicians as competitors for a single representative seat. It isn’t just coincidence that this is the case where the ethnic clashes occurred yesterday.

Police have confirmed that villagers have been incited to violence by local politicians vying for a consolidated district under the new constitution.

To a certain extent both these tragedies are isolated. Kenya tourism – indeed more and more of East African tourism as a whole and almost all of southern African tourism – depends upon small aircraft. I’d estimate in East Africa that more than half the tourists take at least one such flight, and likely a quarter take two or more.

The overall safety record for such a massive industry is pretty good. LET aircraft represent a very small proportion of the tourist aircraft, which are predominantly very safe Cessnas. (Unfortunately, there are no actual statistics, although the data is there to compile. So my statements are not evidential, but I believe accurate enough.)

And the ethnic clashes in Mandera which have been picked up in the world press as evidence of Kenya’s overall ethnic strife is nonsense. The new constitution, some pretty harsh laws, four prominent citizens on trial in The Hague for causing ethnic violence in 2007 all point to a Kenyan society righting itself masterfully.

But dead is dead. Another few hurdles for this tough and struggling society.