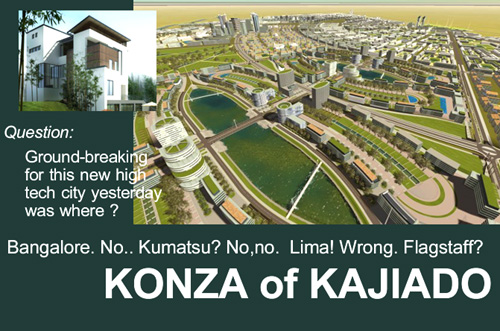 Ground breaking my eye, what happened 35 miles from Nairobi yesterday was nothing less than the Big Bang.

I know I sound like a very old man, but I can’t believe it. “Konza City” was born yesterday, and if it stays on track, by 2020 it will rival the most advanced tech cities in India and create more than 200,000 new high-skilled tech jobs.

Not only will it have call centers that we all know and hate so well serving us as likely as Proschnik in St. Petersburg, but it will have dynamic research facilities building on Kenya’s promising lead in expensive cell phone technologies, as well as medical and agricultural research facilities.

Its developers champion “green technology” and so there will be considerable solar polar.

The Kenyan’s call it a technopolis. The World Bank has funded the $330 million high speed railway that will connect the area to Nairobi, and planning is already well underway. The first rails will be laid in 2014.

But private investors are contributing up to $1 billion to a variety of areas, from private home construction to tech factories to malls. Already smaller Nairobi investors are vying for placement for car shops and grocery stores. $1 billion dollars in Kenya is easily equivalent to $100 billion in America.

The estimated private plus public investment that will have been spent by 2020 is expected to exceed $10 billion, which is an equivalent $1 trillion in the U.S.

I am astounded, and I admit somewhat skeptical. But I was equally skeptical only ten years ago regarding what Kenyan planned to do by today. Today its highways are reducing country-wide congestion, its education system has leaped forward, and a variety of new technologies are performing very well.

But Kenya has to get its political act together to truly manifest this dream. It has to at least achieve the level of transparency and accountability that exists today in India, or in a completely different fashion, the stability and control of a China.

Right now neither of those directions are certain. I’m encouraged that multinationals like Samsung are willing to invest heavily, but this dream will take multiple Samsungs.

The troubles confronting Kenya this minute are formidable, starting with the yet completed pacification of its neighbor, Somalia, to the still top-heavy and corrupt political leadership.

But it is getting better, and the election on March 4 will tell us a lot about whether dreams like Konza are real dreams or pipe dreams.