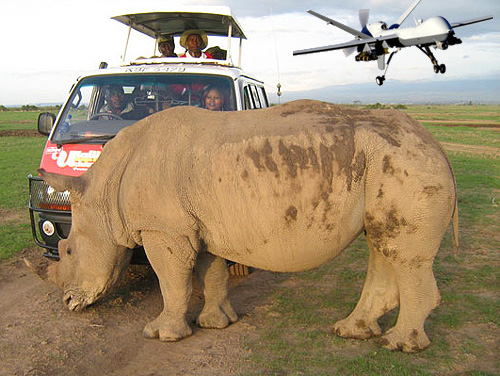 Yesterday’s prickly article in Science that there aren’t as many species going extinct as you thought might be because we’re using drones to nuke rhino poachers.

The journal Science is no teenage blog. The rigors of getting published in magazines of this caliber are legend, and the author, Dr. Nigel Stork, comes well credentialed. He’s the Deputy Director of the Griffith School of the Environment, not just one of Australia’s top schools but a global leader.

So what did Dr. Stork say? Something that alarms alarmists, that right now there’s no reason for alarm.

Stork’s comprehensive data study concluded that species are not going extinct as quickly as commonly thought. There is not, as Richard Leakey convinced me years ago, a Sixth Great Die-off happening, now.

Five times before Leakey’s pronouncement in the 1980s, Planet Earth has suffered a massive die-off of species. We know the reason for several of these, including the giant rock that pummeled Yucatan and accelerated the end of the dinosaur era. Another of the reasons millions of years before was when bubbles of deadly methane trapped deep within the earth were released by earthquakes.

While I can’t put my finger on any study suggesting otherwise, it really has been a widely accepted notion that if not an actual “Die-off” that we were losing species right left and center. Organizations such as Global Issues live not die by pronouncing organic holocaust.

Stork says stand back and take a deep breath. He’s not saying everything is as good as it should be, just that it isn’t as bad as popularly believed.

And to his credit he portends Armageddon if global warming isn’t curbed.

The article made me think about East Africa, of course. I thought of the several species of antelope that have gone extinct in my lifetime, the decline in lions, the ups and downs and right now downs of elephants, and the real loss of a number of smaller forest creatures.

Yet I then had to remind myself of how many new species have been discovered within that period. Now this isn’t like new births replacing deaths, of course. But it may indicate that a balance of sort exists that we were just ignoring.

It’s hard to accept that belief. When we get broadsided by Konza Cities and Mega Malls and highways through forests. But scientifically, it may just be true.

Conservation of known species is today a tremendous art and the technologies that have been employed to nurture our biodiversity are sometimes, well, extraordinary.

Now that the Somali war is winding down, what do you do (if you were Uncle Sam) with all those robotic airplanes flying all over the place? You start an internet campaign to raise money and buy one of them to fight rhino poaching!

And what a steal it was! The drone cost less than $40,000, but keep in mind how fast drone depreciate and this one had none of the bells and whistles of the better models, like missile launchers and laser sprays.

They weren’t particular about the color, either.

Kenya’s most successful rhino conservancy, Ol Pejeta, explained that the drone was purchased “used” from the U.S. company UASUSA Tempest, and that another U.S. company, Unmanned Innovation, will launch it and provide the ground-based monitoring equipment. No comments from these guys since they’re classified.

I’ve always felt that one of the best ways to justify wars is to give away a few bombs. Discreetly, of course.

Now though the campaign to raise enough money is done, Ol Pejeta will let you donate more and you might win the contest to NAME THE DRONE!