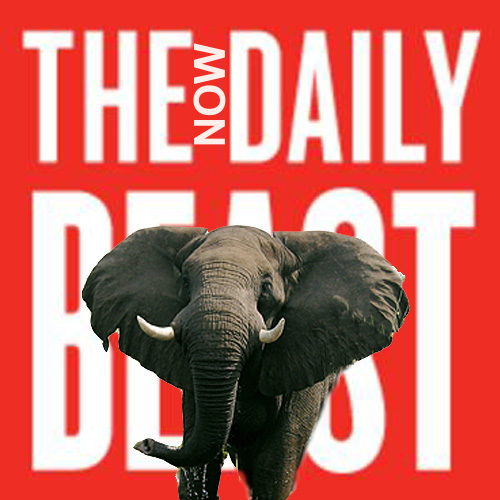 The media hysteria about the increase in elephant poaching will not help solve the situation, not until facts are presented straight and the public realigns its reaction.

Newsweek’s article published tomorrow, disseminated this weekend by the Daily Beast, is the perfect example.

Margot Kaiser’s lengthy article might be considered detailed if it were not rife with so many inaccuracies.

To begin with she cleaves open the story suggesting few but her have ever seen the insides of the Tanzanian ivory warehouse. Local bloggers have been obtaining pictures of the ivory room for years.

That was the giveaway. Kaiser’s handling of the facts was treacherous, starting with her claims that elephant numbers were now “roughly half of what it was in the late 1970s.” The truth is that it’s impossible to say, because we can’t get good data, but a very good guess is that the numbers are closer to double today what they were during the nadir of elephant poaching in the late 1970s and early 1980s.

This is a very hard post to write, because elephant poaching is definitely out of hand and has become a global economic problem that is screaming for management. We mostly look to CITES, the excellent world trade treaty that legislates global laws against the sale of ivory. The problem today is enforcement of those global laws.

And that enforcement is not being helped by near hysterical stories like Margot Kaiser’s.

The problem with elephant and rhino poaching today is much different than when elephant really were threatened with extinction in the 1970s and 1980s.

And that’s the first problem. Even if we did absolutely nothing more to enforce laws against the sale of illegal ivory, elephant numbers would increase.

Tanzania has the worst elephant poaching problem in East Africa, today. I have yet to see a reputable NGO with an official number, but the media is passing around 10,000 elephant poached annually in Tanzania.

I doubt that. Charles Foley, the principal elephant researcher in East Africa, recently released his 2012 annual research report in which he states “many thousands of elephants” not tens of thousands are being poached. Moreover, Foley has documented the highest reproductive rate of elephants ever known in Tanzania to date, with upwards of 7% population increases being recorded in the north of the country year-to-year.

Foley’s assessment suggests that elephant numbers are increasing — at least in certain prime elephant habitats — faster than the increase in poaching.

Unlike the 1970s and 1980s, poaching today is mostly individualized, not corporate. It is worth it today to a small band of individuals to risk life and limb for the value they can get for a couple tusks sold on the black market.

Because the Asian market has exploded in demand as the area develops a middle class in old cultures that have revered ivory for millenia.

And at the same time elephant populations are being better conserved, so particularly in well protected areas their numbers are growing … maybe too fast.

Increased market demand combined with a larger supply …. well, you don’t have to be a rocket economist to figure that one out.

Yet the media’s hysteria is unbelievable. I just don’t get it. We need to look at this fascinating and organically destructive dynamic now happening in the world regarding ivory, but not scream at it.

The answer today, unlike in the 1970s and 1980s, is to deal with the market demand, and there are promising developments, particularly in China, as its population becomes educated to the realities of African conservation.

Taobao, China’s Sears, has banned the sale of ivory products, which previously had been a maintstay of their household decorator market.

Americans like everything to be all or nothing, and that’s why calming down this conversation feels so perilous. I don’t want not to investigate and work towards a better balance with regards to elephant in Africa.

I just don’t want you to believe it’s apocalyptic, cataclysmic to the point we have to “act immediately” or lose everything. Today’s elephant problem is going to take a long time to solve because altering the free market takes time.