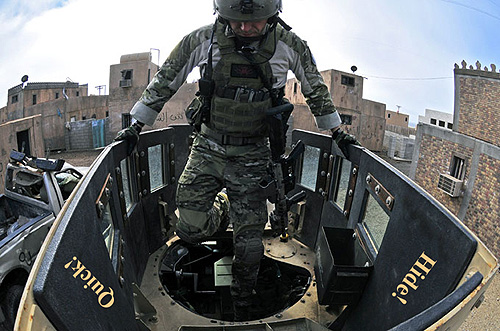 France’s liberation of Timbuktu and defeat of Malian Islamic revolutionaries is right on schedule and demonstrates perfectly the American/French axis routing world terrorism.

Sunday’s Meet the Press roundtable was in contrast the perfect example of how fooled and even bamboozled old guard American media personalities still are. Andrea Mitchell excepted, the remaining two old men got almost everything wrong:

Ted Koppel who presided over the creation of the War of Terror in the media predicted “we’re entering one of the most dangerous eras this country has ever experienced.”

“I think it’s even bigger and more troubling than that,” pounced Bob Woodward, the man who broke Watergate and was apparently broken by it in return.

I’m making no bones about saying that France’s action will be short-lived, especially by the standards of American foreign involvements, and that it will be generally successful. As I said in earlier blogs, I think this is the end-game for the current era of terrorism. That doesn’t mean the end to terrorism, of course, just the end of the al-Qaeda chapter.

The end-game wasn’t supposed to be quite so publicly bloody, and this is largely because of American missteps in Mali. AFRICOM was the new American African command that set in pace a number of militaristic actions I’m ambivalent about, but which did chase al-Qaeda from Yemen to Somalia to central Africa and finally to North Africa where it was supposed to desiccate in the sand.

This three-year chase fragmented what had been a more structured and organized group of very bad guys. Separately, the Obama drone assassinations took out dozens of terrorist leaders, including of course the Top Gun. Like Sherman plowing through Georgia, death and destruction has been left in the wake, but…

…al-Qaeda is gone, Somalia has been pacified and terrorism has been chased on a long arc from Afghanistan down into east Africa and back up to North Africa … where now the French are pummeling it to death.

It got messy in Mali because Americans don’t speak French right. We trained the Malian army and held it up to public scrutiny as a model for modern African armies (allied, of course, to the west).

But those pesky French-speaking Africans got naughty and staged a coup against what we had also championed as one of Africa’s most stable democracies, and together with a few other events like generations of weapons released from Libya, the current war was precipitated.

Tuaregs have been fighting for independence since the dawn of the camel, and al-Qaeda remnants fleeing America’s silent sweep, pushed north into the southern flowing Libyan arms made uncomfortable but convenient bed fellows. For a while.

It couldn’t last. It didn’t. But it was strong enough long enough to give the French cause to attack. The French don’t dither like Americans. They never have, and their unique forms of morality are the same which continue to celebrate Napoleon’s tomb in the Champs de Mars.

North Africa is a mess, but it isn’t the global threat that Afghanistan was. The trouble in Egypt is internal and will last for some time, but it will not spread. French foreign legion will be in Mali for some time, now, but fighting will diminish not spread into Niger or Nigeria as old men American commentators claim.

And the terrorism threat will diminish. The world will be more peaceful.

So why am I so unsettled and near sarcastic?

Because this was all planned. I see everything having happened to a a near perfect specific plan, a covert military mission organized by the Obama administration, cleaned up by the French. The French weren’t supposed to come out of the rafters, but they had to translate for the Americans. That was the only unplanned move. That this all worked and made the world peaceful is good.

That it is covert and so strikingly successful is terrifying.