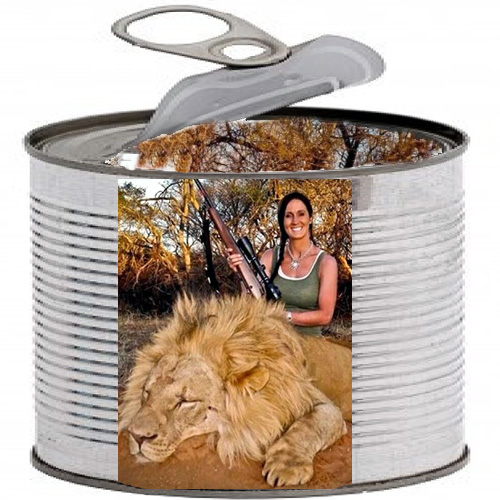 There’s a growing worldwide link against sport hunting and culling with the world’s fatigue with war.

A macho lady, Melissa Bachman (not to be confused with her fellow Minnesotan and not closely related Michelle Bachman) recently drew the ire of much of the world when she proudly Tweeted about the lion she killed recently on a “canned” hunt in South Africa.

Bachman is a long-time cable show producer and presenter for the radical outdoors including sports hunting, although some of her antics finally broke even the now despicable threshold of National Geo’s cable production.

Nevertheless, her fame (and now possibly infamy) was born specifically of her military like approach to sport hunting, out to prove that a dame was just as good as a dude with a big gun.

The specific incident over the weekend has an important nuance to it, though, and it has provoked so much negativity in South Africa that Bachman actually took down her Twitter account, where the trophy was first posted, as well as several of her associated websites.

The specific criticism is that Bachman shot the lion on what is known as a “canned hunt.”

Canned hunting is done all over the world, especially in the United States and South Africa. The hunt is on private land that is beyond the regulation that the larger government may impose on hunting in wild and federal areas.

The South African Parliament is wrestling with a recent court decision enjoining a government regulation that allows canned hunting after a two-month period of “wilding.”

According to that regulation, wild animals like lions may be bought as captive or even tamed onto private land, set free for two months, and then the owner may sell that animal’s hunt to whomever he wishes.

With no regulation: and that’s a big part of the problem. It’s presumed that many of these canned hunts are hardly fair: that the animals aren’t very wild, and in some places, even tranquilized for the inexperienced hunter.

This is hardly a South African disease.

You don’t have to study ecology in an univeresity to know that the natural habitats of those animals mentioned above spans nearly an entire continent, and that not even Texas is big enough to provide any kind of natural environment for all of these animals at once. They have to be fed and cared for like cows.

Likely then, their ability and/or desire to avoid being hunted is greatly diminished.

Canned hunting isn’t so different from contrived wars. And we’re all getting sick and tired of them both.

Anti-hunting sentiment is similar to anti-war sentiment. It crosses ideological boundaries. Just as many of Africa’s most prominent big game hunters are now coming out against canned hunting, so do many of America’s most liberal politicians oppose Obama’s militarism.

When Obama announced his “red line” in Syria last September, conservatives like Rand Paul joined liberals like Alan Grayson in denouncing the strategy.

In fact in town meetings right across the country last September, the sentiment against any type of Syrian intervention was overwhelming. The shared position was simply that we don’t want anymore war.

And the coalition “against killing” is growing well beyond American politics. Whether killing be for sport hunting or preemptive national security: offense is no longer defense.