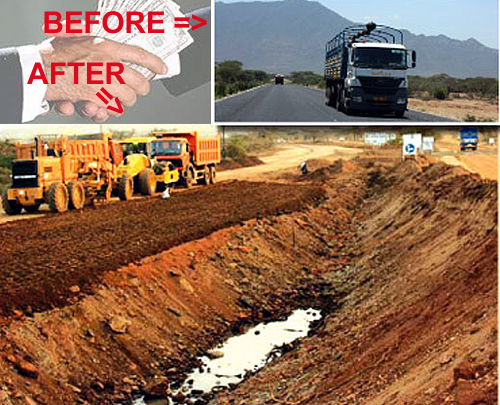 While the battle against corruption in Africa is mostly going well, it’s hit a brick wall in Tanzania. Yesterday, most of the aid-giving free world (less the U.S.) chided Tanzania for dragging its feet.

The donor group, calling itself the “General Budget Support” (GBS) Group, gives Tanzania approximately a half billion dollars annually as direct cash into its general budget fund, about 10% of the country’s projected national budget.

The U.S. in comparison plans to give Tanzania this year approximately $1.15 billion.

The difference with USAid is that it doesn’t flow without conditions into the country’s general fund as is the case with the GBS, but towards specific projects and programs, many of which are outside the Tanzanian government’s budget programs.

Specificity in aid is a hallmark of U.S. assistance, and a controversial one. It’s not only a hallmark of USAid, but of Tanzania’s other principal donor, China.

By specifying what the money is supposed to be used for, the vendors receiving the funds are often U.S. and Chinese companies.

And the U.S. usually does a pretty good job; China often doesn’t.

It’s been less than a year since China finished the Namanga/Arusha/Dodoma road, and it’s collapsing already.

I’ve traveled that road multiple times annually since 1973. It’s rare to be in very good shape, but the best period was from about 2000 to 2008, a legacy of Japanese aid and workmanship.

But no road lasts forever, and even less so when a country is developing and its trucks and commerce are growing.

So we were all extremely excited last year, despite the delays of construction, that this “new road” would bring new speed to the country’s prosperity.

Junk aid is the controversy that surrounds specificity of aid, which is the practice of the Chinese and Americans. Many European countries that have developed real expertise in aid to the developing world, like the Netherlands and Norway, prefer to work through world bodies like the World Bank, or directly with country authorities as is the case with the GBS.

So while it may seem counter-intuitive that giving unspecified aid battles corruption, that’s exactly what this does, as evidenced yesterday by the sweeping indignation of the GBS and its threats to hold back some of what is being pledged.

It’s the same policy that the European Union applied to Greece, Italy, Spain and Portugal. There was no specificity to the cash, other than you better get your house in order.

That’s what the GBS is doing in Tanzania, and from my point of view, it has a lot more effect than America and China’s grandiose claims that their aid avoids causing corruption.

An enormous percentage of USAid, for example goes to a handful of corporations, like Halliburton. (The exact percentages take institutions to figure out, and clearly are being intentionally made difficult to determine.)

Just as in Tanzania the Chinese road corporation, China Geo Engineering, received the funds to rebuild the Namanga/Arusha/Dodoma road.

These mega corporations then pay themselves and their country cronies for such things as equipment, and often for expertise and management as well. The Chinese actually are far more guilty of this than the Americans. It is hard to find a Chinese project with any locals above basic laborer.

That isn’t to say it doesn’t help the local economy, but advocates of the GBS form of aid argue it leads to much greater corruption.

And the corruption begins at home. Halliburton, like China Geo Engineering, is rife with nepotism, cronyism and just simple outright graft. Removed from many of the accounting restraints that would attend them for projects within their home country, they are essentially set free to work as they wish.

Bribing is par for the course.

And whether a Chinese or American capitalist monster, the bottom line is what counts. And that doesn’t seem to be effected by where the bottom of the road goes.