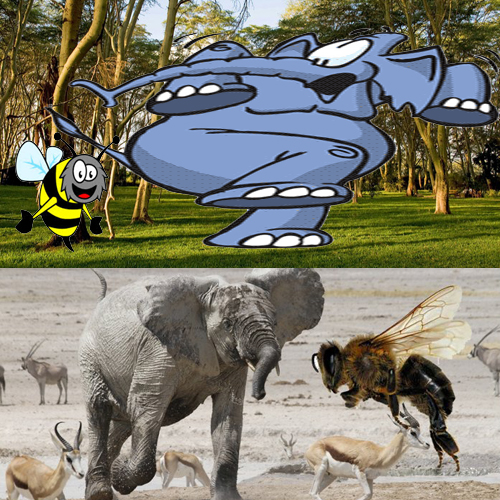 I love this story! African “Killer Bees,” media ingrained mythical honey bees, may be what saves elephants from extinction!

In status quo (which includes increased elephant poaching), elephants are not going extinct.

But if extinction — or even seriously significant decline is postulated, the cause is not poaching. It is the human/animal conflict that is besetting virtually every major African game park on the continent.

Combined with sluggish economies, massive unemployment, and a growing Asian demand for ivory, the conditions are ripe for increased elephant poaching.

I believe that by minimizing human/elephant conflicts, poaching will decrease.

Despite a couple television specials notwithstanding, elephant poaching isn’t easy. A savvy band of criminals takes considerable risk trying to down a jumbo. Once down the ivory harvest isn’t easy, either.

Many poachers are seriously injured in the hunt, and going to a medical clinic isn’t exactly possible unless the practitioner agrees to overlook the cause of your calve gash, which she isn’t supposed to do.

Many injured poachers get medical assistance from local villagers.

Very special knives and other tools for extracting the full tusk must either be uniquely forged by local blacksmiths or honed by artisans. Again, this requires those tradesmen to “look the other way.”

Community sympathy for poachers facilitates poaching… might be necessary for it to happen at all.

Foremost are the farmers in those sympathetic communities adjacent wilderness areas who are trying so desperately to grow corn and water melons, two of the favorite foods of wild elephants, today.

Joining them are headmistresses, community leaders and clerics who are incapable of convincing a jumbo not to walk through their building.

Secondly, the sympathy comes from the politico enraged with the government’s inability to compensate farmers and preachers and school boards for their elephant damage, while generously financing more and more upmarket tourist camps.

The threat to elephants is that they live in a place where people no longer want them. Tourism revenue continues to decline as a portion of African countries’ wealth. Agriculture, education and media are now all more important.

So it seems to me that if we can find some wonderful way to keep elephants where they belong, poaching will become harder and harder to accomplish.

We’ve been trying everything: 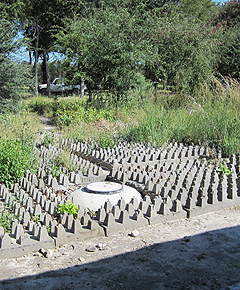 The best ever I’ve found I just experienced a few weeks ago, again, in Botswana’s Nxai Pan National Park: surrounding the toilet and shower complex for the public camp site in the park are a dozen rows of cement blocks fabricated with tiny towers that have a steel rod piercing upwards from the middle.

Elephants really don’t like that. But it’s way, way too expensive for anything but a tourist who has to go.

Beehives every ten meters linked by special trigger wires, so that when an elephant only lightly touches the wire, the bees are enraged.

Save the Elephants, the University of Oxford and the Disney Worldwide Conservation Fund collaborated on this huge and very successful study.

You see, elephants have bought into the myth that these are “Killer” Bees.

Well, actually, researchers noticed a long time ago that elephants avoided eating their most favorite tree, the acacia, if bees were on the blossoms.

“This was followed by behavioural experiments demonstrating that not only do elephants run from bee sounds, but they also have an alarm call that alerts family members to retreat from a possible bee threat,” project leader Lucy King told AllAfrica.

Hey. Anybody out there can design a chip to scream out an elephant bee alarm?