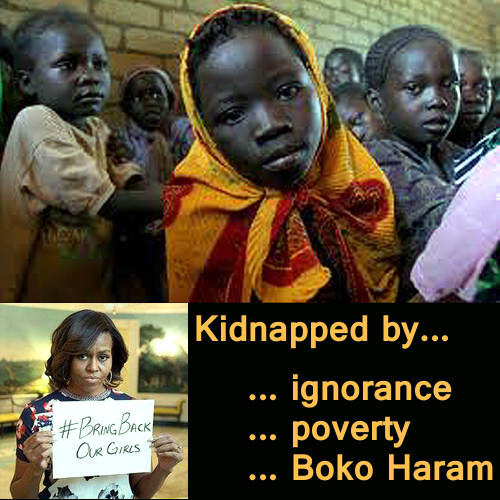 Boko Haram. You need understand little else than the name to understand the situation: “Western Education is Sacrilege.”

‘Boko Haram’ is a Hausa language derivative, which lays blame for the misery in the world upon the educational systems created by the successful, developed world.

Of course there are many in the successful, developed world who agree with this:

Boko Haram believes that traditional western social values as evinced by public institutions are wrong. The schoolgirl kidnapping in Nigeria is an expression of moral indignation at gender equality.

Most western homeschoolers also believe women are inferior to men, or in a persistent homeschool jargon, “more godly” if they pursue a subservient relationship to men.

So in a real sense western homeschoolers and Boko Haram are comrades in arms.

What begins with the gender fracture continues into other aspects of society, like money and power.

Boko Haram, like the IRA, the Basques and numerous other ethnic-derived rebel movements, is fighting for a redistribution of wealth and power.

They arise from a portion of Nigerian society, the north and mostly Muslim part, which has benefited hardly at all from the development of the Christian south.

The less people have, the less they have to lose, the more likely they’ll put their life on the line.

Boko Haram, like all rebel groups, can’t survive on its own. Exploiting the undeveloped roads and vast forests of northern Nigeria, they hide not just in the neglected and undeveloped topography but among the millions of people who share a common misery.

Even the barbaric LRA (Lord’s Resistance Army) received sanctuary from communities that felt they were being neglected to the point of desperation.

In a strange but true sense, American homeschoolers have likewise been neglected. And they find themselves not only bereft of basic understandings of and skills for the real world, but generally at the bottom of the economic ladder as a result.

If these movements are successful and ascend to power quickly or suddenly (take the Muslim Brotherhood or the Iranian ayatollahs), they’re unable to evolve more rational and moral positions. Instead, they reenforce the conservative myths around which they first organized themselves.

That’s the real danger to a just society. So what to do? Suppress them with every gun you’ve got? Imprison thousands? Or from the liberal side: spend billions quickly but carelessly to remedy such failings as their education?

Something in between, I suspect. Perhaps the IRA and Basque separatist movements are models. But what they both clearly show is that these “struggles” are long ones. There’s no quick fix.

Africa poses an additional challenge. The cleavage in so many African nations between the educated and well off, and the uneducated and impoverished, is greater than anything Marx could have imagined, or that ever existed in Belfast or the mountains of northeast Spain.

Boko Haram has been around for more than a decade. According to the Council on Foreign Relations, over 10,000 people have died in Boko Haram violence.

The Nigerian school girls have captured the world’s attention, but they are only a fraction of the horror and misery throughout the whole world.