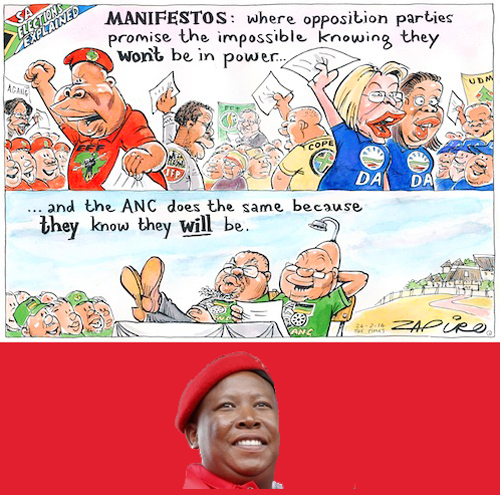 South Africans today “stayed the course” with the bungling ANC in control, but just barely. Change is in the air.

With 98% of the votes counted, the ANC has won 62%. Click here for current, updated results.

I was routing for an ANC loss. I wasn’t hoping for any other specific party’s win, because there are so many other parties and the ANC’s main rival, the Democratic Alliance, seems incapable of organizing the wide and disparate opposition to the ANC and so seems destined as a minority voice, forever.

The ANC’s problem is its top heavy leadership, steeped in buffoonery, bribery and bungling. Whether it’s President Zuma’s dozen wives or former President Mbeki’s certainty that AIDS is not a virus, these are the former freedom fighters who obviously never took Civics 101.

Except for Mandela, they lack any skills except survival.

In the 20 years since Independence, and the 12 years since Mandela left taking rational governance with him, the ANC has squandered South Africa’s resources and turned its political hierarchy into the same old self-serving idiots that lead a number of developing African countries.

And that’s the point. South Africa need not be a “developing” country, anymore. It’s rich, prosperous and filled with opportunity. But all this potential has been extirpated by the last two presidents and their cronies in scandal after scandal.

So my 2% mistake in calling the election you can rack up to hope.

Read my recent blog for my explanation as to why South Africans still support the ANC.

The ANC, however, is definitely on the decline. In the province of Gauteng, where Johannesburg and the capital Pretoria are located, the ANC won only 54%. With its mining, banking and other industry, this is South Africa’s most important province.

In the second most important province where Cape Town is located, the ANC won only 34% of the votes. There the Democratic Alliance holds solid control.

What I’m concerned about is that several very radical if incendiary parties, like the one led by Julius Malema, are growing in support. These are radical groups that would significantly alter South Africa’s democracy.

Malema’s EFF (Economic Freedom Fighters Party), showed some significant improvement this year, winning just under 7% of the vote. But it won nearly 13% of the vote in the mining provinces where it commands huge support from the miners.

And the EFF’s first plank is to nationalize the mines and most everything else.

It’s unfortunate that “clean government” legitimately can often be associated with authoritarian rule, the beneficent dictator who might feather his own bed but rarely allows others to do so. That’s how I, and I think many hard working South Africans, see Malema.

Nationalization, rapid redistribution of wealth, clamps on lying media, exchange controls … all values some of us hold but which never seem to work too well in practice, particularly in today’s capitalist world.

Yet that is exactly what Malema or incarnations thereof will do to South Africa if the ANC continues its buffoonery and reasonable alternatives like the Democratic Alliance are unable to forge strong alliances.

Bottom line? (1) Disappointment that the ANC showed slightly more support than expected or hoped for. (2) Some hope that the ANC’s dwindling support might be a bucket of cold water dumped on some hot heads. (3) Revolution in the wings.