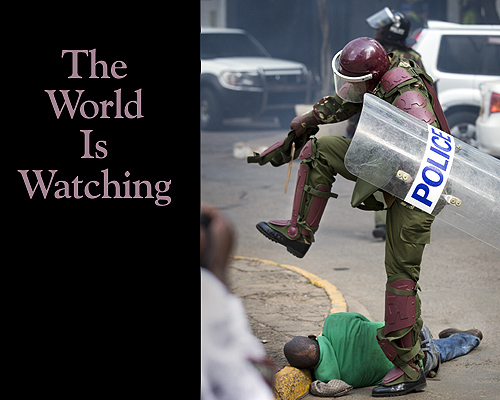 If the Kenyan police don’t clean up their act for next Monday’s protests, tourists should pull out.

Yesterday’s police brutality in Kenya is unacceptable. Property can be protected and citizens safeguarded without beating to death someone who has fallen helplessly onto the street. It’s a despicable, cancerous mentality.

The police action yesterday was worse than in Ferguson or Baltimore or anywhere in the U.S. It reminds me of the late sixties during the anti-Vietnam War and Civil Rights’ demonstrations.

According to Kenya’s respected religious leaders a “volatile political environment” now threatens to undo the country.

Societies go through these difficult times. I’m very proud of having participated in the protests of the sixties and the result of those protests makes me even prouder and made my country stronger. I wish the Kenyan protesters well.

But now as then, in Kenya as worldwide, police action must be kept just and measured.

Kenya’s main opposition party, Cord, announced some time ago that every Monday until the August-2017 national elections, it would stage a demonstration outside the Nairobi downtown offices of the IEBC, the government entity that oversees elections. Cord opposes the current commissioners who it claims are biased against them.

Until the last several weeks these marches attracted hardly a few dozen people. They grew with the police action that clobbered them to a pulp and choked the city with tear gas.

Political leaders made an absolutely wrong decision to meet these rather benign protests with such force. Only now – possibly too late – are the leaders acknowledging negotiations over the IEBC should begin.

But riots are popping up all over the country now: in Kisumu, in the Kibera slum … even shutting down Nairobi university over an issue as pitiful as whether the students should be allowed to cook in their dorms.

Yesterday the Nairobi mayor demanded the prosecution of police caught acting mercilessly brutal on hundreds of cameras and phones.

It’s too late to return to the simple issues that triggered all of these demonstrations. The central issue now is police brutality.

Good politicians and astute public leaders don’t allow issues to fester like this. Kenyan leaders did, and they’re now boxing themselves into a situation of relying more and more on the police.

Most of Kenya’s leaders are old, perhaps too old and arthritic to act with the deliberation and speed now needed to restrain the police.

If they don’t, the situation will spiral out of control. No amount of new police violence will stop it.