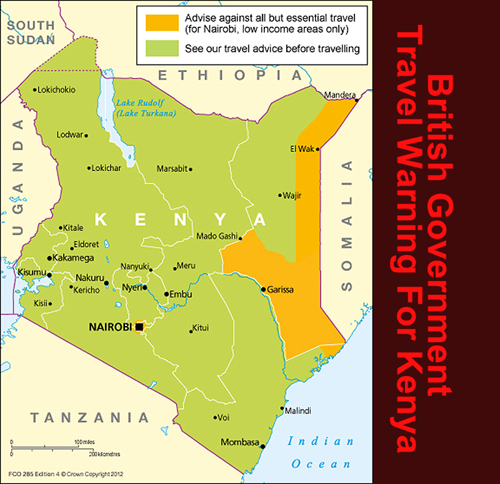 Good news in Kenya is causing extreme turbulence and many countries are cautioning their citizens about traveling there, now.

It’s heart-wrenching, because Kenya depends so much on tourism. It’s complicated, because the potential for disrupting foreign vacations comes specifically from a series of successes in Kenya’s military operation in Somalia and its growing role in the global war against terror.

Britain, France, Australia and Canada among several dozen other countries all issued new advisories to their citizens this week, indicating that travel to Kenya has become increasingly problematic. (The U.S. did not, and that oversight continues a long history of poor and misleading travel advice coming out of Washington.)

All countries said the same thing: don’t go to any part of the northern coast of Kenya including Kismayu and Lamu, and if you travel to Nairobi city, avoid a number of the poorer areas, specifically named.

The reasons for this stem from two major events this week:

A radical cleric in Mombasa was assassinated in a drive-by shooting. As I wrote at the time Sheik Aboud Rogo was a well-known supporter of al-Shabaab, al-Qaeda in Somali, and one the remaining likely fugitives of a number of high-profile terrorist events.

As I said I believe the shooting was done by the very people Sheik Rogo supports as an attempt to incite violence and disrupt Kenya. It worked. Kenya’s second largest town and only port exploded in violence earlier this week.

Secondly, after nearly a year, the Kenyan military is about to invade Kismayo, the final stronghold of al-Shabaab. It’s Somalia’s modern port, largest organized city and the capital of pirates and terrorists the world over. The economy of Kismayo alone is estimated at ten times that of the rest of Somalia.

This week the Kenyan navy continued an unending bombardment of the port, taking out its airport and confirming the death of at least two major al-Shabaab leaders. The Kenyan air force has been dropping leaflets on the town explaining to citizens where and how to flee once the ground fight begins.

After Kismayo falls, al-Shabaab has nothing left but disparate mostly now ungoverned guerilla fighters, and clearly what they will do is attempt strategic acts of terrorism. The Kenyan coast – where 50% of all its tourist revenues are generated – is within day’s walk of Somalia.

And the poor neighborhoods of sprawling, gigantic Nairobi are perfect hideouts for fugitives. This year a number of grenade attacks have already occurred there that were linked to al-Shabaab.

But if you’re a Kenyan, and despite a lot of civil and political turbulence right now (including several major public sector strikes), you’re incredibly hopeful and aggressively behind the government. The march to the historic spring elections under a new and brilliant constitution will become a model for much of Africa.

But fate has dealt Kenya, with its geography and its rapid development, a terrible roll in the world’s struggle to end terror. It’s stepped up to it, and I think it will prevail.

But as much as I support Kenya and hope for its ultimate success and glory, I cannot do anything other than advise potential travelers not to go there, now.