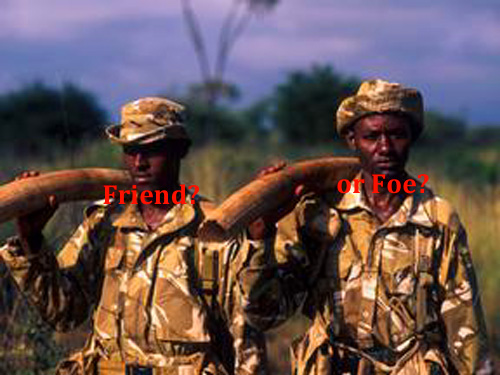 Jeffrey Gettleman described in exquisite detail typical of his outstanding reporting the rapid increase in elephant poaching in remote places like The Congo.

It was an excellent piece of journalism, mainly because Gettleman pulled no punches. He let others explain his conclusion that the culprits are existing governments and renegade militias, and that the problem wouldn’t exist if China weren’t getting rich.

Unfortunately Americans often don’t read that far into an article, and when reduced by the NPR report this morning, some of these very important conclusions were terribly skimmed over.

I often feel ashamed as an American of our knee-jerk reactions to animal cruelty, for example, when it prompts us to greater action than people cruelty in Africa. And this is the perfect example.

Read Gettleman through to the end, don’t listen to NPR, and then think about it carefully.

Elephants today are nowhere near as threatened as they were in the 1980s when selling ivory in most parts of the world was legal. Then the only impediment to wiping out the species was the impoverished and usually corrupt African government that made it illegal to steal ivory from their wilderness.

But once out, the free market reigned most cruelly. And it was easy to get out. The wife of the president of Kenya, the country that suffered the most rapid decline in elephants, was a kingpin in the market. And there were no extradition treaties for ivory.

Ivory has been considered an exceptionally precious commodity in Asia for literally thousands of years, and that hadn’t changed in the 1980s and hasn’t changed, now. It’s an exceptional media that allows intricate sculpture yet holds its form through unusual strength and goes through subtle and beautiful color changes with age.

Like so much in nature, it is so much more beautiful than anything synthetic.

Tanzanian researcher Charles Foley also argues that the OPEC oil crisis of the 1980s prompted Mideasterners to cache their funds in durable commodities like ivory, and to be sure, many of the poaching syndicates were ultimately traced to the Mideast. That was the middleman to Asia.

The problem wasn’t solved until the world came together and created a global treaty that banned the sale of ivory, CITES. It is that treaty still in force today that is no longer functioning.

And the reasons it’s no longer functioning reveal a deep human neglect that is much more profound than neglecting to protect an animal. There are two equally culpable parties: China and The West.

CHINA’s BLAME
Hillary Clinton is today in China making the case for the first: CITES was successful because China and all of Asia (at the time, critically important Hong Kong) was on board. Today, China is ignoring CITES.

And the market for ivory in China is unbelievable. There are literally hundreds of thousands if not millions more rich Chinese than existed in the 1980s, and as their own economy falters and the world seems momentarily less secure, their passion for ivory has renewed geometrically.

When there is such an incredible demand, where an ounce of a product that comes in 100-pound tusks is greater than the average annual income of an African living in central Africa jungles, imagine the temptation to kill the thing.

China’s inability to curb its effete greed, its inability to develop an art culture that doesn’t lay waste a living thing, is essential to understanding this dilemma.

WEST’s BLAME
The West’s culpability derives mostly from its obsession with terrorism and it is a sweet-and-sour story to be sure.

To our credit America is eking away much of the under-the-table and immoral politics of our past history with Africa, and so is much of Europe. The new Dodd-Frank regulations of how American corporations can obtain precious earth metals from Africa has strangled many African warlords. Reparations by several European countries for the most patent sins of colonialism has reversed a century of denial.

But our continued military involvement in Africa, escalated by Obama especially in Somalia and the central African region, has in its military successes turned warlords and militias on the run into elephant killers.

Starved of precious metals like coltan, turned tail by increasing military losses, African guerillas like the remnants of the Lord’s Resistance Army are now fueling their dwindling operations with the ivory trade. And with the market so ready, it’s an easy call for them.

And worse, the ostensible victors in these military skirmishes, especially the Ugandans, have now been documented by Gettleman of using the military equipment given to them by America to slaughter elephants.

I have no doubt that Obama and his advisers believe that the military successes in central Africa and Somalia are worth the loss of elephant.

And that’s the profound understanding you’ve got to acquire from this complicated story. Be patient. Condemn the elephant slaughter, support Hillary in stiff arming China to return with fervor to CITES, but don’t do anything else.

Don’t send a new $100 to Save the Elephants, because you believe the organization which does fantastically good work in Kenya can save an elephant from the Lord’s Resistance Army in central Africa selling to a fanatical China. It can’t.

What will impede the current slaughter is reducing terrorism, making China adhere to CITES, reducing the market value of ivory to something fathomable vis-a-vis an African’s annual wage. And these solutions aren’t easy ones and there is no better way to effect them than to support an American foreign policy on the right track for the first time in a generation.

Nor will elephant poaching be stopped by more guns in anti-poaching, as Gettleman brilliantly reports. It will stop in stages as man’s inhumanity to man stops. It will stop as slowly as greed is reversed and compassion grows.

And plausibly, that might never happen. But if we lose central African elephants we might gain an equally valuable lesson: no animal will be saved in this world, before man saves himself.