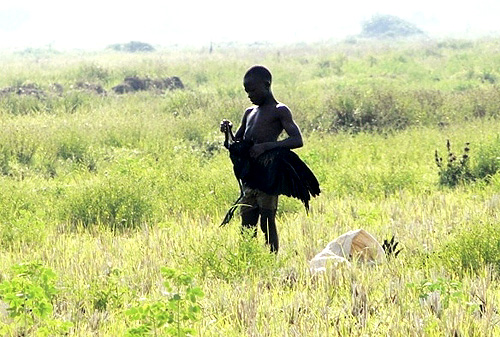 There are many different kinds of poaching and some I actually sympathize with. But a particular type of child poaching in Kenya is uniquely tragic.

Poaching is hardly confined to Africa. The legendary boar poachers in my childhood home of Arkansas, or deer poachers in my neighboring state of Wisconsin have fed grand literature as much as poor folks. And it’s hard to jail a man who is trying to do nothing more than feed his family.

And much of African poaching fits into that category. Yes, it’s against the law. And without a corrupt-free justice system fledgling societies will themselves become poached by the rich and powerful.

And sometimes worse, it involves fragile species and ecosystems like mountain gorillas in Rwanda or a rapidly declining lion population in Kenya’s Mara.

But when the poaching is essentially the way a man feeds his family, it’s very hard to pursue the grander mission. A gorilla poacher on Sabyinyo is not going to eat the gorilla, and the single elephant poacher in The Selous is not going to barbecue elephant. But a market of the rich and powerful is eager to convert their loot into potatoes and mash.

Western Kenya is a diverse environment characterized mostly by dwindling wetlands and forests a part of the greater Lake Victoria ecosystem. It is a densely populated and still rural part of East Africa where some of Kenya’s greatest working poor live.

Historically farmed, there are now too many people competing for too little water and nutrient land.

Numerous aid organizations have been trying to lift rural western Kenya out of its abject poverty. A Netherlands NGO, ISCOM, has been working for a number of years to develop rice farming in the area and it’s working. The area’s rice production is increasing and its population is definitely benefitting.

But not quickly enough.

The area’s rich biomass is concentrated mostly in birds. Kenya’s nearby Kakamega Forest is only 17 square miles and has more than 300 species of birds and 400 species of butterflies. This is roughly twice as many species as found where I live in northern Illinois, which is 1500 times larger.

Many of the birds are endangered but more to the point, child poaching of birds is now near epidemic because of the use of easily acquired pesticides used for the area’s agriculture.

Children lay traps for the larger birds like the openbill and other large storks as well as raptors, by lacing the bird’s traditional food source with poison.

It’s like hunting turkey out of season by lacing berries with D-Con.

The new problem, of course, is that these very strong pesticides don’t only kill the bird, but can very easily kill the person who feasts on them, much less directly infect the hasty child that handles them.

The real culprit here is Furadan. I’ve written about Carbofuran, the proper chemical name, before. It’s a deadly and unnecessary American produced and marketed pesticide now banned in the U.S. but laying waste the developing world.

The latest tragedy was reported yesterday by a Kenyan researcher in the Bunyala rice area. It was nonconfrontational. The kid didn’t realize he was doing anything wrong. He carried a large sack with the poached bird and from the picture appears proud to readily display his catch.

The cheap pesticide marketed by American and European companies to Kenya because they can no longer sell it at home is used by the kids to lace rice that lures the birds. But with the openbill stork shown in the photo above, the bird doesn’t usually eat rice. It eats snails.

The researcher believes the kids are intentionally sent out by adults as a way for the adults to evade prosecution.

Perhaps. But it may also be a way the adults feed the kids.