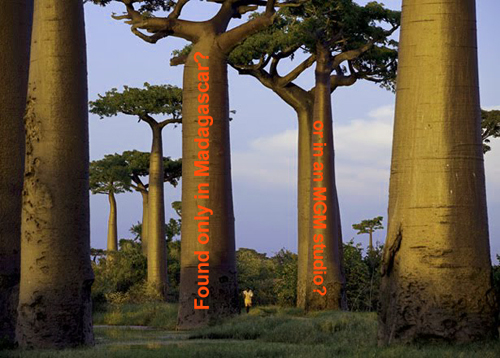 Two scientific studies completed last month now confirm that the incredible rate of Madagascar deforestation is so severe now that the runoff erosion is “smothering local coral reefs.” This is the first time that the well reported rape of Madagascar’s biomass now extends into the oceans.

Westerners know Madagascar for its lemurs, and that is a perfect “mediator” species of the country’s serious political ailments. I coin this phrase, “mediator” species, because lemurs haven’t suffered nearly as much as a species as the vast majority of Madagascar’s reptiles, other animals, plants and birds.

I think this is because much of the Malagasy population is educated and its politicians are as cunning as they are violent, and they all know that if lemurs start to decline the way trees have, that much more attention would be focused on the country’s horrible politics.

Consider this: 98% of all of Madagascar’s land mammals are endemic like lemurs, found nowhere else. Add to this 92% of its reptiles, 68% of its 9000 plant species and two-fifths of its breeding bird population – all endemic. All seriously threatened.

Madagascar’s problem, like Afghanistan’s and Mali’s, is political. I would be the first to point out an economic or forest-human conflict, and much in the press and even the academic media suggests this.

It’s not true. The rape of Madagascar’s biomass has not produced any short-term economic benefit to its population, because the proceeds from the sale and destruction principally of its forests have been siphoned off by corrupt officials and foreign companies. It isn’t trickle down economics; it’s trickle away economics.

The little that remains of the country’s polity and corruptible government does everything in its power to protect lemurs. But little to protect anything else. I wrote earlier how global capitalism has now found numerous insidious ways to exploit the last of precious, endemic Madagascar.

And Madagascar’s Shakespearean if As-The-World-Turns incendiary politics never becomes quite violent enough to attract world attention, either, even though it is starting to destabilize the entire society and keep tourists away. Much of the political shenanigans, in fact, is comical. I wouldn’t be surprised if the warring opponents are in cahoots to reap rosewood profits.

It’s time the world attends to Madagascar, the same way it “attends to” Afghanistan and Mali. Mankind is as much the marvels of the planet as the marvels of human history.