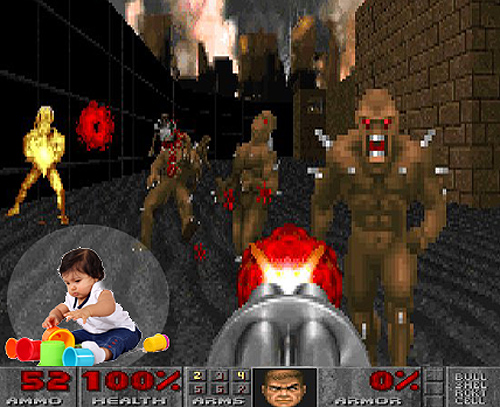 The Grimm brothers, DOOM II, and the Lord’s Resistance Army all agree: terror is child’s play.

Uganda is a good geopolitical source for understanding terrorists. I don’t mean this is where most of the fighting goes on or is even planned; those places like Somalia and Afghanistan are well known.

Uganda is where the Lord’s Resistance Army began and flourished. The country has been a target of numerous al-Shabaab attacks including the group’s most spectacular one, and it’s run by a old dictator who can’t decide if gays should be executed or not.

Today Uganda’s main newspaper published an interview, “Confessions of an ex-al-Shabaab Fighter.” It’s remarkably pro-forma and stinks to high heaven of considerable editing if not outright alteration. Even if the teenager ostensibly giving the interview is real and can be vetted by better journalists, I doubt he remembers correctly his nefarious life.

It’s not the first time that an “ex” teenage terrorist has dumped what he remembers of his terrorist life into the media. Moses, James, and Robert are among some of the LRA child soldiers whose lives became media stories. There’s even girls: Lily.

The meticulous journalist, Peter Eichstaedt, summed up all the foregoing and more in his book, First Kill Your Family.

What’s interesting about today’s interviewee is that he’s not LRA. Isa Ali Senkumbi went more or less of his free child’s will to Somali to train as a terrorist. It’s about al-Shabaab, Africa’s al-Qaeda.

That’s a significant difference with the LRA and other similar militias in mostly central Africa. The LRA usually abducted and drugged the kids before turning them into killers. The LRA is much crazier than the organizations which bombed the twin towers. It’s really more of a cult than an ideological movement. To this day it’s not clear the LRA has any sort of political or social agenda.

Just like most of the Grimm Fairy Tales and many of the (I consider objectionable) teen video horror and apocalyptic games. But whether you side with me that the Cinderella is OK because she always becomes a princess, and that DOOM II isn’t OK because from time to time the world is destroyed, we’d all agree they’re both terrifying with minimal moralism involved.

Not so with ideological terror. At the least your act of jihad can earn your family considerable money. And at most you get the key to eternity.

The LRA drugged and abducted its recruits because the younger a child is the more likely she will be convinced to do something with candy rather than philosophy. So when Isa decided to join jihad he didn’t actually.

He thought he was going for “Islamic training” and did not realize the older friend recruiting him “was recruiting me into al-Shabaab.”

Isa was 13 at the time, and over the next four impressionable teen years he claims to have become an exceptional fighter and terrorist capable of the most daring escapes and missions. But for some reason not explained, he never fully embraced the ideology. So he left.

I think it likely one of the reasons is that he’s too African despite being a Muslim. The well-discussed antipathy of American Jews to American blacks and vice versa is mirrored in that between African and Arab Muslims. It may be less true the further north in the continent with Boko Haram and similar groups. But in East and Central Africa I think it critical.

Isa is now smiling in front of a computer, reformed and protected by an NGO. His story as portrayed today is far from complete and I doubt much of its veracity. The voice in the interview does not sound like a teenager’s.

But when layered with the many other stories of children embroiled in terror it helps us realize: the understanding of good and evil comes at a very young age.

For Hitler, Claudius, Cheney and bin Laden, terror is but child’s play.