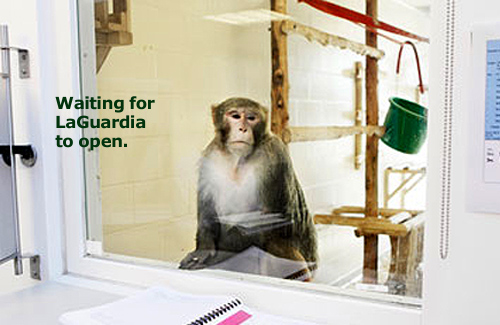 Sandy didn’t just blow the covers off buildings: It’s whipped up an ongoing debate over using animals for medical research.

Two radical animal rights groups, PETA in the U.S, and BUAV in the U.K., are in Sandy’s wake charging that the loss of medical research animals in the storm was cruel and preventable.

PETA has filed suit against New York University (NYU) for the drowning of 10,000 white rats during the storm, that were being used mostly for melanoma research. And BUAV has resurrected a campaign against Mauritius macaque breeding farms that ship mostly to American and UK medical research organizations, as Sandy delayed many shipments.

Only from the perspective of an intensely committed animal rights activist can such attention be garnished in the wake of this super storm. Most of the world’s attention is as it should be focused on people. But this is also the foundation of the argument about medical research.

Most of us countenance the use of animals in medical research. But those who don’t are extremely vocal, a sort of battalion of armed Albert Schweitzers as much a non sequitur as that may seem. And Sandy has given them another public moment.

NYU’s activities will draw less attention than the breeding farms in Africa’s Mauritius, where the long-tailed macaques are bred in pretty horrendous conditions not unlike some early chicken farms in the U.S., and then exported often before being weaned to laboratories around the world for biomedical research.

Cornell scientists proved more than five years ago that the macaque – particularly the rhesus macaque – carries genes and chromosomes remarkably similar to us. Not as similar as chimps, of course, but chimps for medical research in the U.S. is essentially over.

Intense campaigns against chimp research for years achieved significant success last December when the NIH ceased funding any research that used chimps. The decision was fully implemented by this September and technically now, there is no government sponsored medical research that uses chimps in the U.S.

This has left many scientists angry. Drug and nutritional research, many research programs – especially with cancer, Parkinson’s disease and kidney diseases – have essentially come to a halt. The counter arguments are deeply scientific as well and hard to understand, but basically claim that chemical research (test tube analysis) can be just as insightful as watching what happens to an actual living chimp.

It’s also very hard to know being a layman if the decision to remove chimps from medical research is more scientific or more political. In America’s culture, today, the twain rarely meet.

Be that as it may, the next most likely human creature available for research is the macaque, and the easiest place to get them is from the breeding farms in Mauritius.

Purists argue that a living thing is a living thing, whether that be a human baby, chimpanzee, long-tailed macaque or white rat. And that whatever prescripts exist against murder of one should apply to all.

I disagree. There is a big difference between a white rat and a baby boy. If we can do something – as horrible as it might portend – to white rats that will prolong or make better the lives of baby boys, we should.

Regulating that statement is beyond us laymen. It’s for scientists … and politicians. No one would argue that if a good alternative existed it would be given priority. But defining the alternative is technical science… and artful politics.

But there is much less of a difference between a baby boy and a baby macaque.

Or is there? And how do we know? What exactly do we presume? Do we pretend to believe we can understand what a macaque thinks about us?

That’s why it’s so easy to just lump all living creatures together, because that’s easy to know. It’s alive or it isn’t. No EKG, no IQ … just a heartbeat.

The answer is not the easy way out. That much I believe for certain. I’m neither trained or talented enough to parse the barriers dividing humans from macaques, but I trust men out there who are.