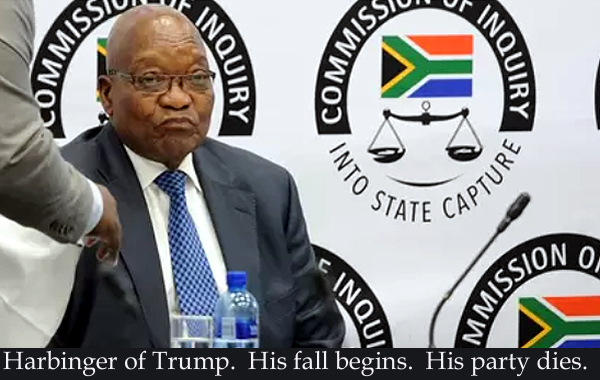 People think I’m nuts when comparing Trump politics in America to Zuma politics in South Africa, but I’m not cracked yet.

Zuma (Trump) is currently in the 4th day of a trial/inquiry into all his wrongdoings before he was ousted (impeached) in the 3rd year of his second term. The same will happen to Trump. Even if you don’t believe that African spirits grace us with foretelling, it’s worth your while to see what a mostly duped megalomaniac can do to a country and the party cajoled into supporting him.

RBH: (ridiculously brief history)
Jacob Zuma was a freedom fighter alongside Nelson Mandela. He was never considered smart but he could sure rile up a crowd. He was the front man for the revolution and he could get a crowd chanting like you’d never believe.

He became South Africa’s 4th president after the fall of apartheid almost by a quirk, a dark-horse who no one ever expected would become president. But the party in power, the ANC, was tearing itself apart with internal ideological squabbles.

In his first term he broke almost every law on the books. To shield himself from prosecution he kept firing attorney generals, maneuvering court appointments and decimating powerful cabinet positions and their agencies. His son became criminally involved. His party was terrified that his lackeys would primary anyone disloyal. He won a second term.

When his crimes grew so large that his own government couldn’t ignore them, he claimed in political rallies that a silent coup by his peers was in the works. The crowds grew livid threatening civil war.

Finally, one year before the end of his second term, he was ousted. The man who replaced him constitutionally won his own election last year. Now, 18 months after he was ousted, Zuma faces life in jail and his party is withering at the stem.

Today in South Africa’s most widely read political daily, the author compares Zuma to Nixon, unearthing an obituary that was written by Hunter Thomspon when Nixon died in 1994:

“The badger will roll over on its back and emit a smell of death, which confuses the dogs and lures them in for the traditional ripping and tearing action. But it is usually the badger who does the ripping and tearing. It is a beast that fights best on its back: rolling under the throat of the enemy and seizing it by the head with all four claws.”

A year and half after being humiliatingly removed from office, Zuma is back. Right now in court, but his supporters chants are rising.

The formal inquiry into his mishandling of government is well underway, and its findings will supplement the more than 600 indictments pending against him and his family.

His current tack: “Zuma’s political game of smoke and mirrors to sidestep accountability took on a dangerous dimension this week when he accused senior ANC leaders of being spies.”

When one of his own appointed ministers laid on the court’s table a lengthy mea culpa that ended with more damming evidence against him, “Zuma cracked under its weight and threw a tantrum, prompting his legal team to withdraw him from the hot seat.”

The author believes this is exactly what Zuma wants.

“It is remarkably logical: the best way to neutralise the clean-up campaign, which is being spearheaded by the ANC-led government, is to destroy the ANC.”

Zuma loyalists who have managed to retain their political positions are rallying around him, calling for a government investigation into the “spies” in the party ranks.

According to the former top intelligence officer in the government, Zuma ”will likely tear the party apart.”

Republicans and Independents and Libertarians – you all beware. You have a chance not to repeat history. You have a chance to stop the insanity of a second Trump term. I can’t appeal to your patriotism, because you have none left. You don’t have to admit to having read this article. You can simplyaccept the logic.

Or you can believe the African spirits that your life will end in ignominy.