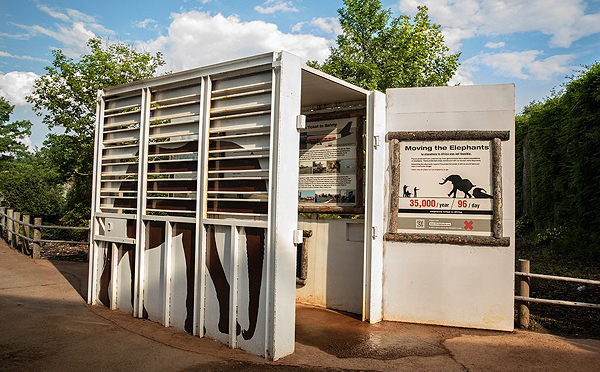 When I defend zoos to my clients on safari I point out the structural shift zoos began three or four decades ago away from public entertainment. Most zoos have shrunk in physical size. Most now have fewer animals on display and most spend increasing amounts of their revenue on field conservation and scientific research.

I enjoy telling safari visitors that almost all animals born today in zoos come from parents that were born in zoos. There is an exception, elephants, and that’s erupted into a major controversy.

A recent investigative article by Wesleyan Fellow Charles Siebert in the NYT Magazine castigates a half dozen zoos along with the larger national zoo umbrella association for importing elephants from Swaziland and for continuing efforts to import them from Zimbabwe.

The article rightly points out that both professional zoo opinion and conservationists in general have come to the broad conclusion that elephants cannot humanely enough be kept captive in the zoo enclosures as they currently exist in the U.S. The flipside argument is that these imported elephants aren’t harvested from the vast wilds of Africa, but taken from poorly managed and often inhumane private reserves or local zoos in Africa that no longer want or are able to host them.

Referred to as “rescue” elephants the argument continues that their relocation improves their lives. In one case where the ‘rescue’ effort was nearly interrupted by court filings in the U.S., Siebert reports that the African broker of the sale affirmed the elephants would be killed if they weren’t bought.

Nevertheless, Siebert believes that the elephants cannot be humanely received in the U.S. In lengthy reporting and detailed interviews with zoo employees and officials he suggests that the individuals involved in these ‘rescue’ efforts are rationalizing if not intentionally misleading public opinion simply to increase the zoo’s gate revenue. Elephants remain a primary reason the public pays to visit a zoo.

That’s too harsh. Siebert’s excellent reporting about the shifty character involved in the Swaziland transfers is enough for any reader like myself to grow livid. I think Siebert was overcome by his own justifiable anger to indict all the zoos involved in the transfers.

I don’t doubt that several of the primary zoo officials discussed in the article were motivated more by fiscal concerns for their institutions than humanitarian considerations for the elephants, and that’s definitely disappointing coming from individuals who theoretically hold animal needs above bottom lines. But it begs the question whether it’s the right thing to do.

From my point of view, the problem with what’s happened in Swaziland and may happen again there and in Zimbabwe is the misallocation of resources. It’s extraordinarily expensive to move an elephant. It’s hugely expensive and time consuming to file the necessary documentation through various national then international institutions to earn the permit to do so.

Technically all elephants – live or dead – are restricted from being moved across international boundaries by the wonderful C.I.T.E.S. treaty. This is the treaty that saved elephants from extinction more than three decades ago.

It’s expensive to provide the proper temporary enclosures needed in intercontinental transport and then most expensive of all to build proper facilities to permanently house them. Care of elephants in captivity is described beautifully in Siebert’s article: it’s detailed, dangerous, expensive and often unsuccessful.

As Siebert points out elephants relocated from Africa to American zoos don’t breed. That’s actually good news for animal rights activists, for some conservationists (not all), but it certainly proves that the animal’s normal physiology is damaged.

From my point of view relocating elephants from Africa to America is too expensive. It’s a misallocation of resources from the more immediate problem of elephant conservation in the wild, as well as to the much greater problem of human/wildlife conflict.

Siebert takes a number of liberties that disturb me, starting with his seemingly facile quote of elephant statistics, like overall numbers, which were anything but accurate. It was clear to me that Siebert sees elephants more like people than as a critical link in the ecosystems of African wilderness, and that his anthropomorphic support for elephants leads him down an unnecessarily vitriolic path.

The article is critically important for revealing some real difficulties in the zoo system, the mafia-like unethical world of animal barter, and for seriously questioning whether this particular importation of elephants is right or even criminal.

But his bent is too swayed by approaching elephants as people. Elephants don’t mourn. They aren’t vindictive or vengeful. They aren’t people. People are more important than elephants and have inalienable moral rights that animals don’t have. People are animals’ trustees.

We have an obligation to preserve and make better the world as we’ve been given it, and although I personally disagree because of the costs, translocating elephants for conservation is a plausible strategy that ought not assume those involved are in it just for the buck.