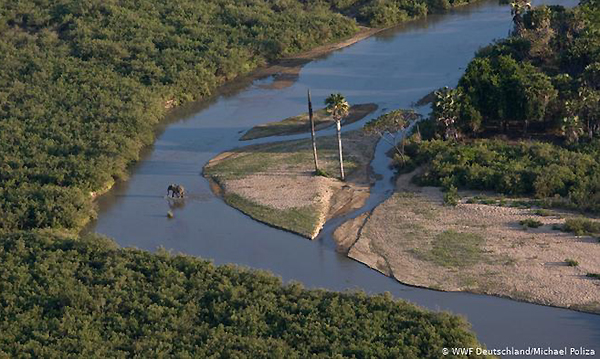 About eleven months from now I’m guiding an exclusive group of veteran African travelers on what I donned the “Last Chance Selous Safari.” Will we be too late?

London’s Daily Telegraph posted, “Kicking up plumes of dust that scatter the grazing wildlife, a relentless flow of bulldozers, water tankers and lorries trundles along the main track across the northwest of the reserve towards Stiegler’s Gorge..”

This dire characterization doesn’t comport with contemporary reviews of travelers on TripAdvisor, nor understandably with the camp managers and owners who I’ve talked with.

Rather from what I can gather the “relentless flow” isn’t quite that: what traffic does exist moves northeast along the eastern boundary before getting out of the tourist area and heading west then south towards the construction site.

The dam will be constructed at Stiegler’s Gorge just south of the Beho Beho Hills. There are several popular camps near here. Those west of the planned dam site have already begun to close. AfricaGeographic reports, “seventeen Tanzanian companies have been awarded tenders to clear 1,500 square kilometres of terrain – an estimated 2.6 million trees.”

All vegetation must be cleared before flooding begins supposedly next year. Camps east of the planned site remain open but I suspect the closer they are to the site the more likely wildlife viewing is compromised.

Best I can ascertain from afar, the relatively small tourist area of about 150 sq. miles west from the Mtemere Gate to the Beho Beho Hills remains in tact and minimally disrupted. This is where 90% of Selous camps are, along the beautiful winding Rufiji River with its many estuaries, sand swamps and lakes. The further east (toward Mtemere) the better.

The controversy over the dam has also revved up. The Selous is an UNESCO Heritage Site, a critically important designation for developing countries’ conservation areas, as it results in huge sums of foreign funding.

Until now most of this has come from Germany but a vitriolic debate in the Bundestag in January over tying future German assistance to ending or modifying the dam project has placed future funding in doubt. The UNESCO experts have moved The Selous into the “endangered” category of sites, risking its continued designation.

Tanzania desperately needs electricity, and Stiegler’s is projected to produce more than double what the nation currently thinks it needs, providing new export revenue. Expert naysayers claim the projections are way off, however, particularly as the waters of the Rufiji recede dramatically with climate change.

The dam is forecast for completion in 2021 but that’s impossible. Tanzania has confirmed only a half billion dollars in current financing. The Daily Telegraph estimates final costs will be over $8½ billion leading to widespread speculation that China will fund the shortfall. Chinese workers from SinoHydro and Power China are regularly seen entering the park.

Changing water levels, increasing amounts of traffic, power lines and power stations, new roads and just all the added activity will absolutely effect the wilderness. When this will become noticeable to a visitor is hard to say.

The gazetted Selous is nearly 20,000 sq. miles, Africa’s largest protected wilderness. The area that I’ve been talking about, and including the large area to the west of the proposed dam that will be cleared of vegetation and flooded, is less than 15% of the entire reserve. The remnaining 85% is wild, undeveloped wilderness – some still reserved for big game hunting – that conceivably could be able to create the “new Selous.”

If it weren’t for other plans. Deutche-Welle reports that huge hunks of this undeveloped southwestern Selous have been given to Rosatom, a state-owned Russian uranium mining firm. Chinese have first dibs on newly authorized oil and gas extraction in the far north. Twelve other pieces of the reserve are going up for auction as copper, silver, cobalt, zinc, gold and rare earth mining plots.

Clearly Tanzania has chosen energy over conservation, as the Daily Telegraph claims.

In a press conference reminiscent of Trump’s, Tanzania’s president’s spokesman castigated a journalist questioning The Selous development plans: “For those who might not be aware, President Magufuli is the number one conservationist. We don’t need anyone from outside Tanzania to teach us how to conserve our environment.”