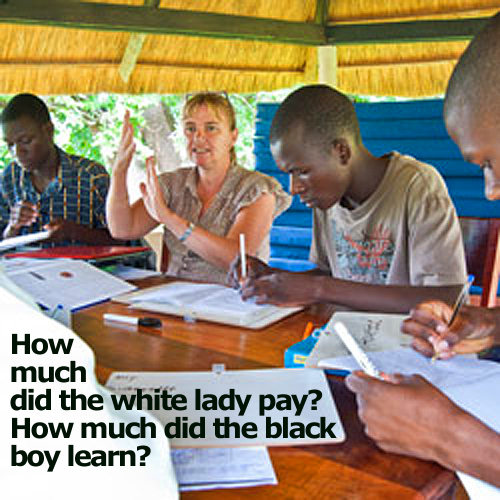 The main motivation for the vast number of foreigners who wish to volunteer in Africa – including religious-based “missions” – is not to help Africans but to help themselves.

That in itself is not necessarily bad. And it was as true of David Livingstone as it is of an early adult in Britain trying to figure out what to do during her “gap” year.

Most of Africa’s problems, today, are the same that plague the foreigner’s own turf: poverty, adequate health care, literacy and education and particularly how those who suffer are not equitably distributed throughout the society.

So that begs the question: why, then, volunteer so far away from home where the same problems exist? Doesn’t charity “begin at home?” Shouldn’t we “clean our own house” before attending to others?

There is a compelling argument that a specific given improvement in the worst sector of a global problem (Africa) will improve the entire global arena more than that same given remedy if applied to a better sector of the global problem (at home). And there is the corollary that more skills and training are required to impact an already partially improved situation (at home) than abroad (in Africa).

But this is a dangerous if finely tuned game.

A Google Search of “volunteering africa” brings up multiple pages of foreign organizations competing for and selling volunteer programs in Africa. It commercializes charity, and has reached the point in my estimation that it’s not just distasteful but immoral.

Project Luangwa in Zambia is an antidote to this rabid capitalism exploiting misfortune. I can’t say that I wholeheartedly support it, because I remain convinced that independent volunteer tourists achieve little more than personal satisfaction.

I remain certain that only government-to-government aid projects, or projects organized by huge world organizations like the United Nations are capable of effecting meaningful global change for the better.

But Project Luangwa is infinitely better than foreign companies or churches or aid organizations purporting similar outcomes in Zambia. The reason is simple. It’s Zambian.

That also makes it more difficult for me to challenge its mission, although I believe a certain motivation comes from the fact that Project Luangwa is created by tourism providers who are perforce enhancing their basic tourism products by managing a growing market demand for volunteer tourism.

Nonetheless it’s better they do it than someone from Britain or the U.S.

And their website cuts off the enthusiasm at the pass with cold facts about costs, living conditions and necessary skills. It’s an excellent first-level model for any tourist area in Africa trying to deal with willy-nilly foreign volunteers.

I’m particularly impressed by the consortium of otherwise aggressively competing local Mfuwe area vendors that have come together, recognized their common problem and concluded that only by working together can they address is.

The “problem” Project Luangwa addresses is the free market response to a growing demand for volunteerism in Africa. This includes thousands (if not hundreds of thousands) of poorly prepared small foreign organizations like churches and Rotary Clubs, as well as hundreds (if not thousands) of mercenary capitalistic predators like good website designers providing products to assuage the volunteer first, with little thought to solving Africa’s problems, second if we’re lucky.

Project Luangwa is a local filter that foreign organizations don’t have. It funnels foreign generosity into specific areas (even though their website purports very common and general needs). It makes no compromises on costs.

The greatest flaw I see is the acceptance by Project Luangwa of short-skilled volunteering. It just doesn’t dare discourage wannabee painters of school room walls not to come. Even though this irritates communities who have legions of unemployed wall painters.

But Project Luangwa’s careful organization of primary and secondary school volunteer teachers, particularly in close partnership with the Zambian educational system, is good.

I still don’t like it. Above all because it still provides a way for individual westerners to coopt their otherwise difficult personal responsibilities to engage meaningful political paths towards meaningful remedies, with a very temporary band-aid effort.

But I like it a lot better than foreign alternatives.