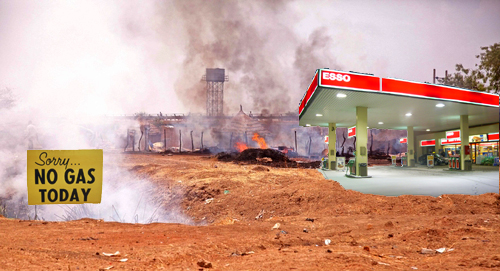 Only China can stop the Sudanese war. This is the first great test of its diplomatic strength and savvy in Africa.

Five days later the South retreated having been whipped to smithereens by the North, and the North then began aerial bombardments of the South which continue today.

South Sudan’s invasion of the disputed oil field at Heglig was the height of abject stupidity. The young country, dandy of the west and George Clooney, is revealing a personality its supporters hadn’t expected: a militant immaturity.

What on earth led the idiots in the South to think they could whip the North, which for a generation had clobbered them from 500 miles away?!

According to a Reuters report today petrol pumps were running low last week in the South and the idiots in Juba decided they had to come up with an excuse to get more oil.

This was likely because the South is running out of foreign currency, a failing of its own fiscal management combined with the international community having not lived up to its donor obligations, including the United States.

But instead the South decided to use PoliWarSpeak and claimed it was because the oil fields on the 20% of the two territories which remain in dispute were being mismanaged or pilfered by the North. Clearly the only option left was to invade and get slaughtered.

The huge swath of rich oil territory which remains in dispute between the two countries is a festering wound of an incomplete breakup, governed essentially by international oil companies. But it was nonetheless producing oil.

And both countries were receiving some revenue, although drastically less than they could if the areas weren’t in dispute. Now oil production is stopped. Dead bodies litter the oil fields.

The western powers led by the United States brokered the breakup, then turned quiescent way too soon. The South has lost all faith in its original supporters.

So the President of the South went hat in hand to China two days ago.

China needs oil more than any other single political entity in the world, and it has warm relations with the North, unlike the western powers which are remembered mostly for sending missiles onto northern pharmacies under Clinton and removing the cash cow from the barn.

So it’s China’s move, and the poor giant is generally not wont to direct politics from afar, preferring a status quo in situ as the perfect state of life.

If it wants oil, it’s got to broker peace. Paradoxical historical imperative, eh?