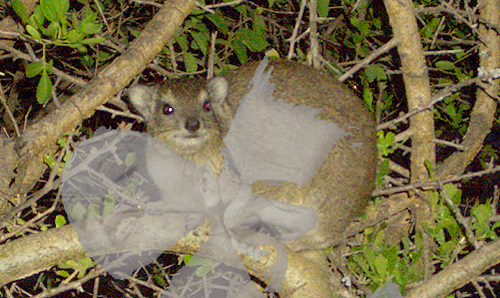 Scientists just discovered that the little furry African rock hyrax is an amazing communicator. So why didn’t he put up a fuss when I told everyone he wasn’t related to the elephant?

One of the best parts of my job as a guide is to drop amazing factoids. Like (1) the distance from Dakar in west Africa to Mombasa in East Africa is greater than the distance from Dakar to New York (3900 vs 4100 miles – use GoogleEarth to confirm); or (2) the entire GDP of Kenya is less than a quarter of the GDP of Atlanta ($70 vs $304 billion); or !!

(3) The little rock hyrax is the closest extant relative to the giant elephant! (By the way, we old hands called them “dassies” rather than hyraxes. Same beast.)

But then several years ago, hanging our heads in abject humiliation we legion of guides had to accede to what Wikipedia summarized all too kindly that “.. not all scientists support the proposal that hyraxes are the “closest” living relative of the elephant.”

But DNA to the rescue!

They are close! Not number two, but number four. Dugongs and manatees are numbers 2 and 3.

And now we’ve learned that they might be number one among non-primate little ratty communicators!

Because the social behavior of this little rat is so similar to elephants, and because truly its anatomy (inside and out) is also so like elephants, early taxonomists naturally placed them close together on the evolutionary line. Early taxonomy has a remarkable record in being affirmed by DNA, and that’s what’s now happened.

The common ancestor of the elephant and hyrax was a bit long ago: 60 million years ago, and at that time it was as small as today’s hyrax.

But why hyraxes could retain that size but the new line of eles couldn’t was a mystery. But now we might be getting a clue.

The evolutionary power of hyraxes is concentrated remarkably in its … voice! So while the ele naturally selected itself into being the biggest and most invulnerable mammal to survive meteors and ice ages, the hyrax decided rather than expand its size, it would expand its vocabulary!

“This is something you find very, very rarely amongst mammals,” explained the research scientist, Arik Kershenbaum.

The only other mammals besides primates to communicate so sophisticatedly with sound are bats and whales.

There are more than 50 species of hyrax throughout Africa and the Middle East, and they all talk. But they talk differently, as you would expect, of course. Persians don’t understand Zulu.

But my favorite is the one we hear all the time in the East African highlands. It’s actually called the “tree hyrax” since it spends most of its time, there, eating leaves. At night when it sings, and I kid you not, it sounds like the door of a vaulted castle closing on a maiden screaming as she’s being sucked to death by a vampire.

Rather hard to replicate.

If’d you’d like to understand, I have a safari going there in April …