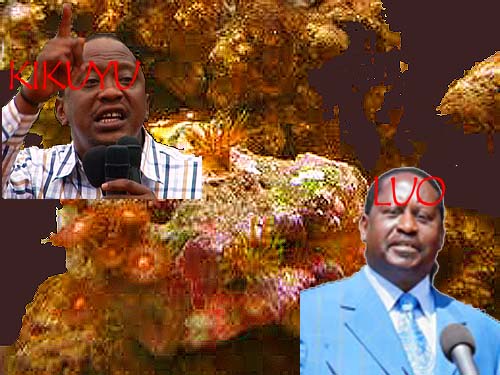 After 4-5 years of impressive political progress throughout the continent, dark clouds form above Africa. The last two days in Kenya haven’t changed my predictions for a peaceful future, but they are worrisome.

I still believe that next year’s March 4 Kenyan election will pass into history as one of the most impressive maturations ever of a young African society into a peaceful world. There has been so much work in Kenya these last five years on a new constitution and public policy that literally tens of thousands (if not hundreds of thousands) of Kenyan citizens have all been deeply and individually vested.

But last week the ugly anemone of ethnicity waved its poisonous tentacles, again. And yesterday as the police tried to stop what they believed was a ratcheting up of ethnic violence their overly violent reaction veered into newly unconstitutional territory that almost perforce thrusts the leading presidential candidate into a death match with his adversary.

Nothing in African politics is simple. You’ve got to be a fan of Shakespeare to be motivated to mine the details for a real understanding.

But after you work through the puzzle, the picture is always the same: ethnic conflict.

Political turbulence and actual coups in Mali and Guinea-Bissau, following potentially as violent events that cooled down in Mauritania and Senegal, are equally complex to what is playing out now in Kenya. But personally I think the stakes in Kenya are much higher.

Kenya’s 2007 political violence set the stage for the rest of Africa’s so-called “spring” or “awakening.” Not just the social mores, the actual software used to organize the rallies in Tahrir Square was written and first used in Kenya in 2007. It’s why I call all this rapid, mostly positive political change in Africa “twevolution” (twitter + revolution).

If Kenya can emerge from this transition new and beautiful, it’s a model for the rest of Africa.

In all the troubled cases in Africa, Kenya in particular, the various ethnic groups are linked to radically different social theories: Raila Odinga, the current prime minister and leading presidential candidate, is a bigger government socialist. His main opponent in public polling, Uhuru Kenyatta, is a smaller government capitalist.

Ethnic divides around the world throughout history are all the same. Over long periods of time they become wrapped in different religions and political ideologies – which become the tools of their debate in a modern context – but it is the hate the Hatfields have for the McCoys which drives violence.

Less than 20 miles from Nairobi political rallies began several weeks ago, ostensibly for one or another candidate. Several of these were not strictly ethnic, they really were multi-ethnic but highly politically charged. Most were for Raila Odinga. He is the leading candidate and very widely respected throughout the country. He probably commands three-quarters or more of the support of educated Kenyans.

So there was nothing immediately suspicious that some of these rallies were held in a place that 20 years ago was not the multi-ethnic suburb of Nairobi it is, today. It was the heart of Kikuyuland, the home of Jomo Kenyatta, the favorite Kikuyu of the British colonial powers and Kenya’s first dictatorial if beneficent “president for life.”

So on Tuesday when the opposition announced it was going to stage a counter rally in the same place, alarms went off in the public psyche from the desert to the sea.

For one thing the demonstration was announced by a mafia leader, Maina Njenga, who barely escaped jail earlier this year. Njenga is a rabid criminal who is widely considered to have had a major part in the 2007 violence and its lingering aftermaths.

What makes matters more complex is that Uhuru Kenyatta is on trial in The Hague for instigating the violence in 2007.

Even the fact I can say that, “he’s on trial in The Hague,” is absolutely remarkable if unbelievable. Kenyatta and three others have so far submitted to the International Criminal Court’s indictments against them. They are the first accused in the history of the World Court to voluntarily travel back and forth to The Netherlands for a trial that could imprison them for most of their remaining lives.

Any presumptive notion of their public goodness, though, likely belies a much more clever strategy. If Kenyatta actually becomes a candidate (he hasn’t, yet), it would be absurd to think he would continue to succomb to jurisprudence in The Netherlands. Then, what?

The Tuesday gathering that was stopped violently by police was scheduled to have been attended by a number of leaders of several different ethnic groups. It was certainly mostly Kikuyu, but not entirely, and that “not entirely” is what gave it legitimacy.

But the police didn’t see it that way and so banned the meeting, which of course fueled the fire. Tear gas and then ultimately live ammunition were used to stop the rally.

Odinga immediately reacted with indignation, taking the high road. He denounced the police and he has the powers to fire the police leaders if he so chooses.

“Kenyans were yesterday (Wednesday) treated to a spectacle that they thought had been banished from their lives with their new Constitution,” Odinga said in his statement.

“The sight of police officers putting up roadblocks on a major thoroughfare and repeatedly firing rounds of tear gas at hundreds of perfectly peaceful people caused intense alarm,” he added.

Good. Even at his own peril, Odinga is defending the constitution.

Now let’s hope enough other Kenyans do the same. I believe they will.